Faridkot, Punjab: Youth Congress leader and Gidderbaha MLA Amrinder Singh Raja Warring yesterday visited Deep Singh Wala and Ghudduwala villages in the district to meet families of 11 youths who were arrested on May 6 for damaging a private bus.

It may be recalled that following a clash between the operators of a private bus and some students in Faridkot in the afternoon of May 06, the police brutally cane charged the students when they reportedly started damaging the bus.

Some students and bus operators sustained injuries in the clash and a bus was got damage. 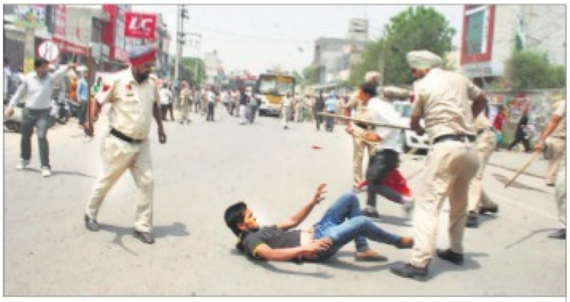 The police had booked 29 students under the attempt-to-murder charge and have arrested 14 students, including two girls. The arrested students are members of Punjab Students’ Union (PSU). In the wake of the Moga molestation and death incident, the PSU had given a statewide call to obstruct the entry of private buses, belonging to political leaders in Punjab.

Warring alleged the students were beaten up in police lock-up on the day of their arrest. He said the police and jail authorities did not allow the family members of the students to meet them.

Even five days after their torture, there were deep contusions and abrasions on the bodies of these students, which spoke volumes of the police and Badalshahi brutality, he alleged.

“The private bus operators who enjoy political backing have got false cases registered against the students, including a girl and a minor. They were tortured by them in police custody,” he alleged.

Independent MLAs Simarjit Bains and Balwinder Bains had alleged that the Faridkot police let the goons sent by a Badal Dal transporter to torture students in lock-up on May 6. The students, who are in police custody, were booked on charges of attempt to murder after they clashed with private bus operators on May 6.