Chandigarh: The Aam Aadmi Party on Wednesday (Nov. 28) accused the Congress government led by Amarinder Singh to shield Badal family and facilitate them in flourishing their transport business in state in an inappropriate manner. The party said that Indo-Canadian transport owned by Badal family is violating the motor vehicle act while ferrying passengers from various cities of Punjab to Indira Gandhi International Airport, Delhi.

Addressing the media at Chandigarh, the leader of opposition Harpal Cheema, senior leader MLA Aman Arora and spokesperson MLA Prof. Baljinder Kaur said that Badal family is using contract carriage permit as stage carriage permit to ferry passengers from different cities of Punjab to Delhi Airport. They alleged that all the illegal work is being done in compliance with Capt. Amarinder Singh. 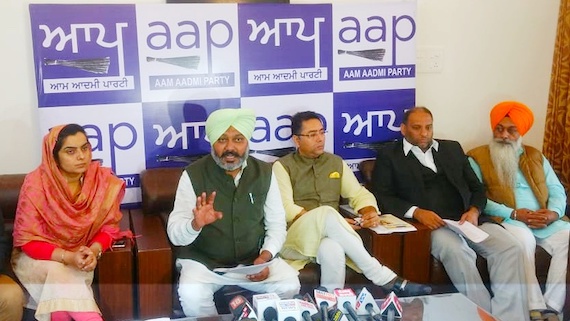 AAP leaders also alleged that Badal family during its 10 years of government has violated all kinds of rules to flourish their own transport business and failed the state transport. They said that the people of Punjab choose Capt. Amarinder Singh with expectation that he will take action against Badals but rather than working against them he compromised and failed the state.

The AAP leaders maintained that Indo-Canadian buses reaching IGI Airport are violating the rules as they are using contract carriage licence while collecting the passengers from different cities and even through online booking. They said that as per the guidelines of contract carriage permit these buses cant even enter the bus stands of cities to board the passengers but Indo-Canadian buses are violating this clause as well. They said had the Amarinder Singh led government been serious about taming “transport mafia” in state the buses of Badals would have been sieged in hours.

They said that it is the high time that the Punjab government must take action against the “transport mafia” being operated by Badals to stop the loot of people of Punjab and reinstall the glory of Punjab Roadways.

AAP leaders said that the Badal family during their tenure in government had grabbed the control over time table of buses in state and allotted the majority of trip times to their own company. The worst part is that the new government has not even bothered to amended it.

Replying to the question of Roadways buses being not allowed to reach IGI Airport, AAP leaders said that it is as per the guidelines of the Supreme Court of India that no non-CNG vehicle coming from other state will be allowed to go beyond ISBT.

AAP leaders said that the Punjab unit has raises the issue with Delhi CM Arvind Kejriwal and he has proposed to construct new ISBT at Dwarka new IGI Airport.