Hoshiarpur: After England, the Sikh Sangat of East and West Punjab will hold Shardanjali Samagam in memory of Manmohan Singh Khalsa -the founder member of pro-freedom group Dal Khalsa who passed away on Nov 20 at a hospital in London.

Informing the media, party spokesperson Kanwar Pal Singh said to pay homage to departed leader the prayer meeting would be held at Nankana Sahib on Dec 1.

He further said over here we were organizing the Samagam at Gurdwara Singh Sabha, Hoshiarpur on Dec 3 where panthic personalities would pay rich tributes to him. He said his passing away was a huge setback to Dal Khalsa and his absence will always be felt. 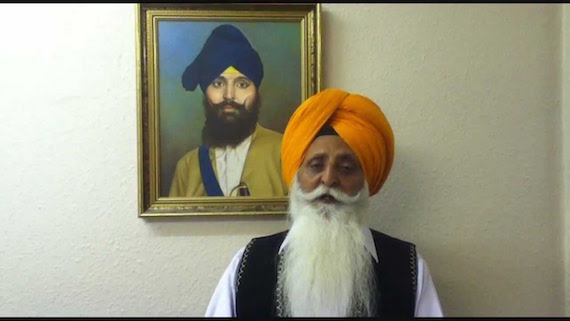 Dal Khalsa leader said the cremation and bhog ceremony of Manmohan Singh was held in UK yesterday where family members, relatives, associates and friends made tearful farewell to the departed soul. Manmohan’s mother who lives in Chandigarh could not attend his sons last rites because of his ailing health condition. However, his brothers from Punjab and US were present.

As a first, Manmohan Singh’s body was taken from his residence to cremation ground at Hunslow on the chariot and as a mark of respect the flag of Sikh Sovereignty was unfurled. Manmohan Singh was a diehard protagonist of Khalistan. Teary-eyed Sikhs especially youth raised Long Live Khalistan slogans for a final send-off to their leader. Speaking at a gurdwara, representatives of all Sikh and Kashmiri groups hailed his contribution and dedication towards the struggle for right to self determination.