Former Chairman of Minority commission S Tarlochan Singh joined the valedictory session of the conference as the chief guest.

In his address to the gathering of academicians and scholars he said that through conferences like theses one is able to attain a deeper understanding of religions and different cultures, which in turn helps in promoting harmony and peace at the global level. 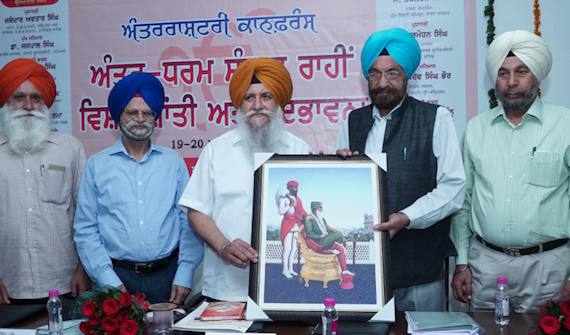 As per a written release issued by Public Relations department of the University [t]he former chairman praised the efforts of Sri Guru Granth Sahib World University and said that conferences and platforms like these are the need of the hour and it is through exchanges like these that one learns to respect and protect the cultural and religious identity of others.

Vice Chancellor of Sri Guru Granth Sahib World University, Dr. Gurmohan Singh Walia presided the valedictory session of the conference. The Vice Chancellor said that we live in a globalized world where on one side exchange of ideas and products is transforming our lives but on the one the other hand we are also witnessing religious fundamentalism, communal hatred and violence and for this purpose interfaith dialogue is need of the hour. The Vice Chancellor said that keeping in mind the importance of interfaith dialogue in contemporary times, the University has decided to organize an interfaith dialogue conference every year from now on. He added that not only this, the University has decided to set up a center for interfaith studies for the same purpose as well. He was of the view that it is important that we decipher and understand the hidden meaning of the scriptures ourselves first before we start preaching it to others. Invoking the teachings of Guru Nanak Dev Ji Dr Walia said that Guru Granth Sahib is replete with messages of Universal Brotherhood, peace and harmony and it is not only our duty but the University’s mandate as well to promote this message to the farthest corners of the globe.

The valedictory address of the conference was delivered by Dr Harpal Singh Pannu, Professor, Punjabi University Patiala. In his address he highlighted how different religions have learned and adopted from each other over the years and it is imperative that we make sure that we continuity to evolve our culture and religion on the basis of inclusivity.