Cheering over the unprecedented achievement of the students, Baba Sewa Singh said that with the grace of almighty God, the aim set by the institute which was founded for imparting quality science education to the youth from all sections of the society, had been seen to be achieved.

Congratulating the students on phone, he said, “These students have brightened the name of the institute and parents. They are progeny and pride of the Kaum.” 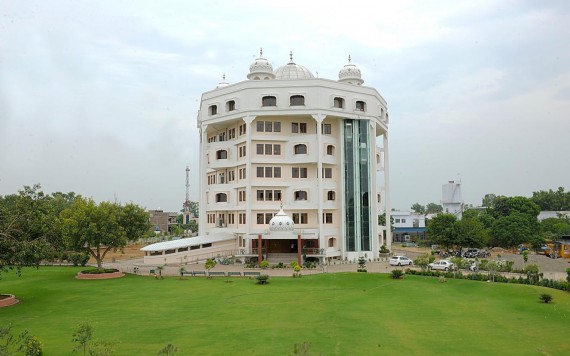 Lauding the students, Gursharanjit Singh Mann said that clearing such kind of Entrance Examination which is considered as toughest one in the country in field of engineering and technology, is great achievement for which we are making persistent effort under the guidance of Baba Jee.

Talking to media persons, Tarlochan Singh said he wanted to opt Electronics and Communication after being admitted in IIT. However, he said, his final aim was to be an IAS officer.

“After being an IAS officer, I shall have the opportunity to serve the society. I aspire to bring the hidden talent in remote and underprivileged areas to fore by providing them aid in the field of education. “, he said, adding, “I want to fulfil my dream maintain my religious and heritage ethos, I got from my ancestors”.

Simranjit Singh also expressed his will to be an IAS officer in order to eliminate crime in the society. He said he wanted to join stream of Computer Science in IIT. He wished to help orphans after achieving his final ambition.

The entrance exam is conducted for admission to premier technology and engineering institutes of the country which include the IITs and NIT.

It is worth mentioning that as many as 29 students of the Institute had cleared the state level pre-medical entrance test (PMET), result of which was announced couple of days ago. Some of them secured high ranks in the result and are likely to get seats in government owned medical Colleges and other reputed medical colleges. Significantly, Navreet Kaur bagged 31st rank. Prior to this, numerous students had secured seats in various reputed engineering and medical institutes.

This is the institute which is dedicated to prepare the youth of Sikh nation for various competitive examinations thereby enabling them to achieve top posts in the fields of defence, medical, engineering, civil services etc. Baba Sewa Singh believes that Sikhs can ensure their dominance by securing key positions in above mentioned fields.