Washington D.C.: The U.S. Army granted three more observant Sikh American soldiers long-term religious accommodations last Friday, permitting them to serve with their articles of faith intact. Two have been accommodated in the Army National Guard, and one in the U.S. Army Reserve. This victory for three more clients comes right after the accommodation of a decorated Sikh-American Army captain.

More than doubling the number of Sikhs permitted to serve since the early 1980s, the four new accommodations represent significant momentum for the campaign to end religious discrimination by the nation’s largest employer, the Department of Defense. However, we continue to advocate for the goal of a permanent policy change for all Sikh soldiers as no one should ever have to make the choice between their religion and service to our nation. 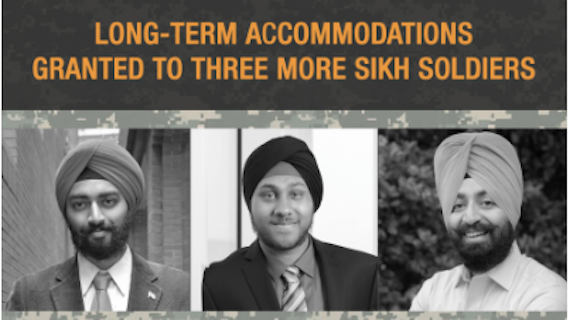 “We know, the federal court knows, and even our nation’s largest employer, the DoD, knows that engaging in case-by-case, burdensome accommodation processes while enforcing a discriminatory ban is illegal and indefensible,” said the Sikh Coalition’s Legal Director, Harsimran Kaur.

The Sikh Coalition, The Becket Fund for Religious Liberty and McDermott Will & Emery filed a lawsuit against the U.S. Department of Defense and the U.S. Army pursuing religious accommodations for Specialist Kanwar Singh, Specialist Harpal Singh and Private Arjan Singh Ghotra on March 29th so that each could begin Basic Combat Training with their units in May. The Army granted their accommodations before their cases are scheduled to be heard in court later this month.

“I will proudly wear my articles of faith with my military uniform,” said Private Ghotra. “I am excited and honored to have the opportunity to serve my country as an observant Sikh in the Virginia National Guard.“

In concert with co-counsel, the Sikh Coalition will continue to pursue legal claims on behalf of each of the recently accommodated soldiers to ensure that the Army moves swiftly to establish uniform standards for the service of observant Sikhs. We are also demanding that the Army remove discriminatory monitoring and reevaluation provisions that leave open the possibility that the accommodations could be rescinded at any time.

“Although we are encouraged that the door continues to open for observant Sikhs to serve in the U.S. Armed Forces, it’s time for the Department of Defense to remove all religious barriers to service once and for all,” said Amandeep Sidhu, partner at McDermott Will & Emery. “Our military must permanently change its deeply flawed policy.”

A special thank you to Major Kamaljeet Singh Kalsi, whose tireless work to support this campaign continues seven years after he received the first religious accommodation to serve in the U.S. Army in nearly a generation. Major Kalsi is joined by Major Tejdeep Singh Rattan and Corporal Simran Preet Singh Lamba as the groundbreaking Sikh Coalition clients that paved the way for these new landmark victories.