Washington, DC (June 6, 2015): In remarks delivered in the U.S. House of Representatives on June 3, the 31st anniversary of a disastrous Indian government assault on the Sikh Golden Temple, Congresswoman Zoe Lofgren (D-San Jose) called on her colleagues to “honor those killed during the November 1984 anti-Sikh pogroms and massacre” and “honor the struggle of political prisoners in India today, including Mr. Surat Singh Khalsa.”

“Thousands of Sikhs fled state-sponsored genocide in India to seek refuge and find political and religious freedom in the United States,” remarks Bhajan Singh, Founding Director of Organization for Minorities of India (OFMI). “Representative Lofgren’s bold remarks are the first step towards national recognition of the atrocities perpetrated by politicians and security forces who still hold positions of power in India. Reconciliation requires recognition, so we plan to pursue remembrance of the victims of all state-sponsored genocides against Indian minorities.”

In her remarks to the House, Lofgren stated: “November 2014 marked the 30 year anniversary of the horrific anti-Sikh pogroms, which claimed the lives of thousands of Sikhs throughout India in the first week of November 1984. I ask that this Congress remember those who were killed that tragic week.”

Lofgren additionally invoked the cause of Surat Singh Khalsa, a U.S. permanent resident from Lathrop, CA who has been on hunger-strike in India since January 16 to demand release of political prisoners who are being held past their court-appointed sentences after being arrested in the 1980s and 1990s for protesting against the genocide. “I also ask that this Congress honor the struggle of many political prisoners in India today, including Mr. Surat Singh Khalsa, who is currently under house arrest, on a hunger strike and in very poor health,” said Lofgren. “Today, we should reflect on his advocacy for the rights of political prisoners, support his right to free speech and ask for his release.” 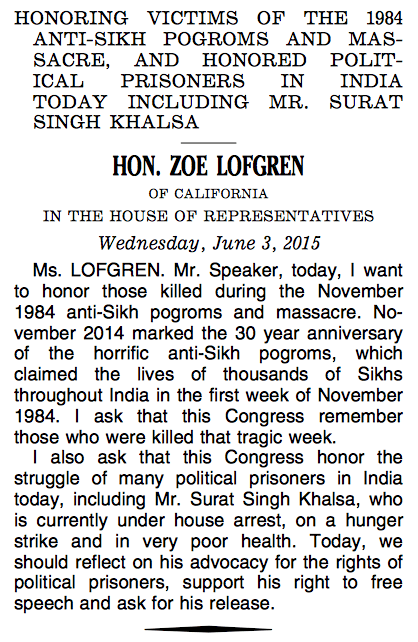 “June is a painful month for the global Sikh community because it marks the genesis of the 1984 Sikh Genocide and reminds them that countless innocent victims have yet to see the slightest justice,” says Pieter Friedrich, an OFMI advisor. “To suppress dissent against national policies, the Indian Army massacred civilians in an unprovoked invasion of the Sikh Golden Temple during the busiest day of the biggest annual Sikh festival.” He notes a report by US-based human rights group Ensaaf states that, after the June attack, “the scene had been set for an even greater calamity five months later.” Friedrich says, “The genocide culminated in November with a systematic slaughter of Sikhs in the streets of India’s capital, New Delhi, where members of parliament, city officials, and ruling party leaders burned alive and dismembered thousands.”

California is becoming a hub for commemoration of pogroms against Indian minorities. On June 2, the City of Modesto recognized the 1984 Sikh Genocide, as did the City of Manteca on May 19. The California State Legislature also recognized the genocide on April 30, becoming the first national or state government in the world to do so. The legislature was preceded by the City of Stockton, which on March 10 acknowledged multiple anti-minority pogroms, proclaiming:

“We remember with sorrow the deaths of innocent Muslims killed in 2002 in the Gujarat Genocide and of innocent Christians killed in 2008 in the Odisha Pogrom. We commemorate the 30th anniversary of the 1984 Sikh Genocide, remember the thousands of innocent Sikhs whose lives were tragically cut short in that event, recognize the ongoing impact of the genocide for Sikhs around the globe, and call for justice.”

“The U.S. government has previously credited impunity for the 1984 genocide as an instigating factor for later atrocities,” says Bhajan Singh, referencing a 2011 report by the State Department’s Commission on International Religious Freedomwhich declared:

“In 1984, thousands were killed in anti-Sikh riots that erupted in Delhi…. In the late 1990s, there was a marked increase of violent attacks throughout India against members of religious minority communities, particularly Muslims and Christians, including incidents of killings, torture, rape, and property destruction. In 2002, Hindu-Muslim riots in Gujarat left an official death toll of 1,272 (with some groups estimating double that number of actual fatalities), the majority of whom were Muslims. In all of these cases, justice has been slow and inadequate….. The failure to provide swift and adequate justice to religious minorities perpetuates a climate of impunity, which allows the harassment of and violence against religious minorities to continue unabated.”

Lofgren’s recognition of the Sikh genocide follows her initiation of a May 26 letter to Secretary of State John Kerry on behalf of Surat Singh Khalsa. Joined by five other representatives, she appealed to Kerry to “monitor Mr. Khalsa’s situation and urge the Indian government to immediately release Mr. Khalsa.” Under house-arrest at the time, Khalsa was taken into police custody and forcibly hospitalized just six days later. The letter stated: “We are seriously concerned about the repressive actions that have been taken against him for continuing to peacefully exercise his right to free speech.”