London: In midst of increasing hate crimes reports against the Sikhs in UK specially after the Brexit vote of 23rd June home secretary Amber Rudd on Wednesday (Dec. 21) visited the largest gurdwara outside India in Southall to discuss the importance of tackling hate crime against Sikhs.

As per the media reports Rudd met Sikh leaders and community groups at the Sri Guru Singh Sabha Gurdwara in Southall and heard about work underway to bring the community together to beat hatred. 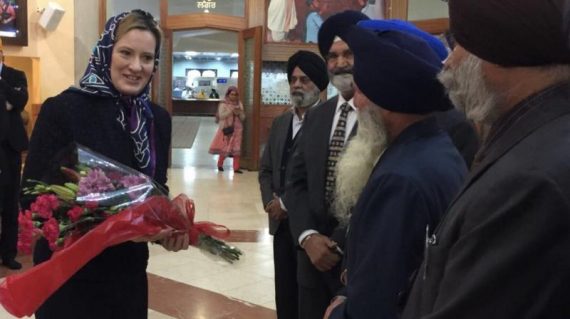 While talking to the media Rudd said “The Sikh community plays an important role in the diverse Britain that works for everyone and I was delighted to visit the Sri Guru Singh Sabha Gurdwara and hear about the important work taking place to unite the community.

“Hate crime has absolutely no place in our society and it is vital we protect those who follow this peaceful religion”.   That is why I’ve made over £3 million available to protect places of worship and for community projects to combat hatred, and I’d urge all gurdwaras and Sikh groups to consider whether this funding could help them”, she further adds.

Media reports quote Gurmel Singh secretary general of Sikh council UK saying “This was a great opportunity to see first-hand the Sikh ethos of self help and community cohesion in action. The Home Secretary’s commitment towards tackling hate crime and improving community cohesion is acknowledged, and the role faith can play in modern Britain is very well received by the community”

Rudd published the Hate Crime Action Plan in July, which included measures to combat racial and religious hate crime. Alongside action to encourage greater reporting and tougher sentences, she announced £2.4 million that places of worship which are at risk of, or which have been victims of, hate crime can apply for to fund security measures such as CCTV or fences, media reports further said.