Westminster, London: Leaders of some UK based Sikh organisations, along with the Westminster cross party group ‘Parliamentarians for National Self-determination’ (PNSD), recently briefed the UK Labour Party’s shadow cabinet minister (with special responsibility India policy) on the continued repression of the Sikh freedom struggle by India.

As per a written release issued by the organisers of the meeting, they were told that the Labour party’s official position is to support the right of self-determination for all nations and that, by virtue of the Sikhs being a nation – recognised as such during hundreds of years of Anglo-Sikh relations – the right applied to the Sikhs in their homeland.

Fabian Hamilton MP, a renowned foreign policy expert and newly promoted member of the Labour shadow cabinet, expressed deep concern at India’s suppression of peaceful political action as shown by the arrest and continued detention, on dubious sedition and other charges, of Sikh leaders following the November 2016 Sarbat Khalsa. He warned that the elimination of political space, so that the masses were denied the ability to freely and peaceably express their demands, was not only contrary to democratic norms but risked the degeneration of the dispute to violent conflict. 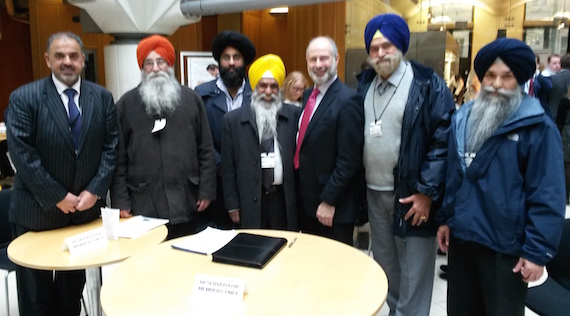 Lord Ahmed, Chair of PNSD, spoke of the terrible history of genocide and repression of the Sikhs since the notorious Operation Bluestar in June 1984 and gave his continued commitment to raise Sikh human rights and self-determination matters with the UK Government and beyond.

Fabian Hamilton agreed to take up with the UK’s Foreign Office its response to the repression in Punjab and the widely reported dossier delivered by the Modi delegation to the UK in November 2015, in which Sikhs have been made the subject of wild and completely unsubstantiated allegations of terrorist activity in the UK. That dossier needed to be exposed along with the intent behind maligning Sikhs on an international basis. He assured the Sikhs that the Labour Party leadership was committed to pursuing human rights and justice issues on a principled basis, guided by international law. It was recognised that the Sikhs have suffered massive injustice in India and that it was time that the international community sought redress. 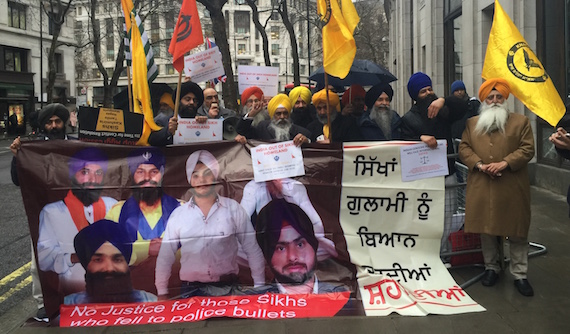 A view of protest by Sikh groups

Amrik Singh Sahota OBE and Mohan Singh Thakkar (both from the ), Gurdev Singh Chohan (Shiromani Akali Dal UK) and Lovshinder Singh Dalewal (United Khalsa Dal and Co-ordinator of the Federation of Sikh Organisations UK) represented Sikh organisations at the meeting. They went on to take part in a demonstration outside the Indian High Commission in London where, along with other Sikh groups and Kashmiri organisations, they marked Indian Republic Day as a ‘black day’. The Indian Constitution – in contravention of international law – denies nations their right to self-determination and even categorises Sikhs as Hindus. India’s forcible denial of self-determination for Sikhs, Kashmiris, Nagas and others has been the direct cause of massive conflict which the protestors roundly condemned as shameful and worthy of criminal sanction in an international tribunal.