UK Military Signs An Agreement With The Sikhs

London: A United Kingdom (UK) based Sikh organisation and British military represented by defense secretary Michael Fallon here on Thursday have signed a covenant named as ‘Armed Forces Covenant’  officially recognising the strong historical and contemporary ties between the community and the armed forces. 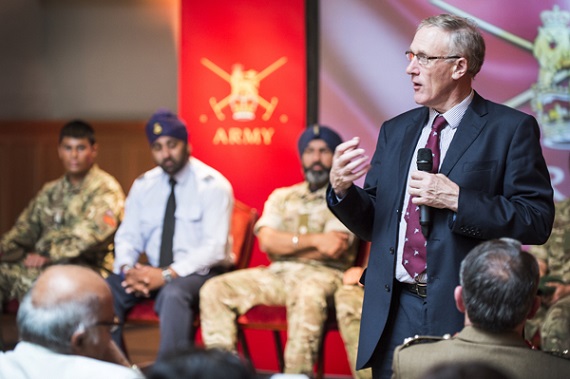 Image For Representation Only.

The agreement was reportedly  signed on  last Thursday at an event to celebrate Vaisakhi with the British Sikh Association.

Whilst interacting with the media Michael Fallon said that “A diverse military is a strong military, which is why we’re committed to making sure our forces better represent the society they serve – this covenant signing is yet another demonstration of this.”

“Sikhs have a rich history with the armed forces, from their unsurpassed courage at the Battle of Saragarhi 120 years ago, to the hundreds of thousands of Sikhs who fought for Britain during the First and Second World Wars. We will work with the association to ensure that tradition continues,” Michael Fallon further added to his statement.

Media sources indicated that currently 170 Sikhs serve in the Royal Navy, Army and the Royal Air Force, with many more serving as reservists.