London: As per the media reports Prime Minister Of United Kingdom Theresa May here today while addressing the British Sikhs on the of Vasakhi has said that Britain needs Sikh values of equality and respect more than ever as the country forges a “new and ambitious role” in the world post Brexit.

Greeting the Sikhs on the occasion of Vaisakhi, Theresa May said Sikhs have set an example for all. 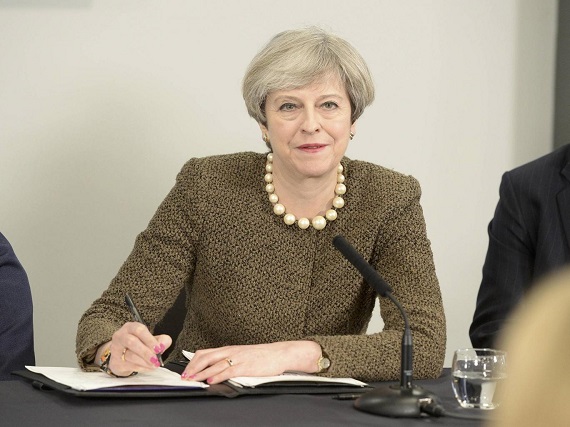 “I send my best wishes to everyone in Britain and around the world celebrating Vaisakhi – one of the most important dates in the Sikh calendar and a time when families and friends come together to commemorate the birth of the Khalsa,” Theresa May was quoted saying from the video message by an English vernacular.

Sikhs in the country consistently follow the pillars of their faith, which sets an example to all, she further said.

Praising Sikh values of equality and respect, of fairness and helping those less fortunate, the British prime minister said these values Britain needs more than ever as it forges a “new, ambitious, role” in the world, notes The Economic Times.

“I am determined to build a country that works for everyone; a country where no matter who you are, you can achieve your goals – and the Sikh community is a vital part of that mission. So as the dancing and the festivals begin, at home and abroad, I would like to thank you for all that you do and to wish you a very happy,” reads a quote from her statement published on a media website.

“As Sikhs across the globe take part in spectacular processions and neighbourhoods and gurdwaras burst forth with colour, I would like to take this opportunity to celebrate the immense contribution British Sikhs make to our country, she adds to her statement.

“Whether it’s in the fields of business, the armed forces or the charitable sector, you consistently follow the pillars of your faith and in so doing set an example to us all,” she said.