London, UK: The Rt Hon Andy Burnham MP, Shadow Home Secretary, Maria Eagle MP, Shadow Secretary of State for Culture, Media and Sport and Baroness Doreen Lawrence (the mother of Stephen Lawrence) are co-hosting an event in the UK Parliament on Tuesday 9 February on the challenges faced when “Campaigning for Justice”.

The Sikh Federation (UK) is pleased to announce it will be given a platform to talk about past injustices. The format for the event is that it will be in a ‘select committee style’ and open to all MPs and Peers from across the political parties. There is expected to be strong interest and it will be open to the media and to the public.

In total there will be five witnesses representing a range of campaigns. Each witness will be invited to give an opening statement of five minutes. MPs and Peers will then ask questions and delve further into the issues. The focus of the event is to identify specific policy changes to help campaigners. The fact that the Sikh Federation (UK) has been approached and given the opportunity to give evidence is significant. 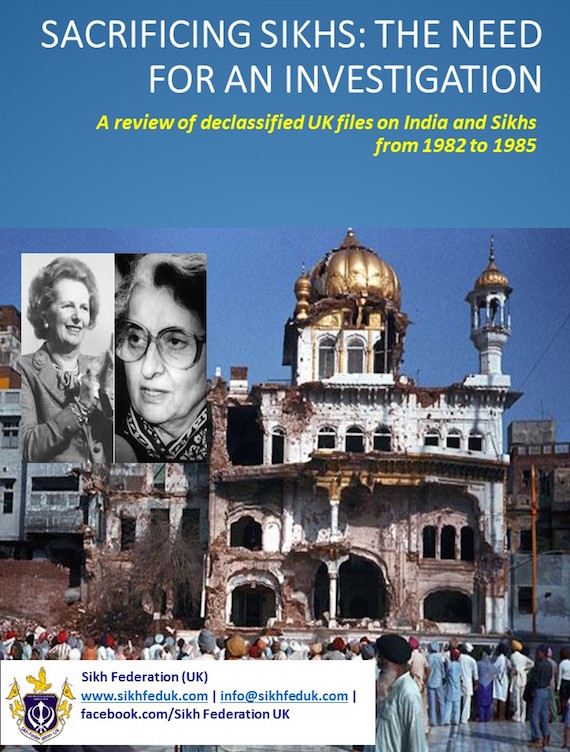 The other witnesses will be from the Hillsborough campaign, the Stephen Lawrence campaign, the Orgreave Truth and Justice Campaign, which is campaigning against what it describes as police lies during the miners’ strike, and the Shrewsbury 24 campaign, which is campaigning for the quashing of the convictions of construction worker pickets, including the actor Ricky Tomlinson, from the 1970s.

The Sikh Federation (UK) has been asked to focus on the January 2014 revelations under the 30 year rule concerning UK Government assistance to the Indian authorities in the June 1984 Indian army assault on the Sri Harmandir Sahib Complex, often referred to as the Golden Temple Complex.

It will be the first time the Sikh Federation (UK) will touch upon its findings from a draft report titled: “Sacrificing Sikhs: the need for an investigation – A review of declassified UK files on India and Sikhs from 1982 to 1985”. Despite the obstacles presented by the current UK Government the report presents new evidence to challenge the review commissioned by David Cameron undertaken by Sir Jeremy Heywood, the Cabinet Secretary and the most senior civil servant, into the revelations.

The report not only demonstrates how India successfully used promises of arms deals to pressure the UK Government to assist in the Genocide of Sikhs in June 1984, but also take actions to try and discredit and silence the minority Sikh community in Britain from raising its voice of opposition.

Bhai Amrik Singh, the Chair of the Sikh Federation (UK) said: “The state’s paramount obligation should be to protect life, not to sacrifice the rights of one section of society for the sake of other interests. The British state instead has a duty to investigate any alleged involvement in war crimes, crimes against humanity and torture.”

It is now clear the Sikh community and the public at large was never meant to have known that a British Special Forces officer carried out a military mission in Amritsar, months before the Genocide of Sikh pilgrims in June 1984. The disturbing story that still to be told is the Indian establishment made lucrative trade and arms deals contingent on the UK implementing anti-Sikh measures. The vocal minority Sikh community therefore faced and still face state discrimination on the one hand and racist and hate crime from right wing groups on the other.

The Sikh Federation (UK) is considering how best to use the report from a political as well as legal perspective. When the report is released in the coming months it is expected to include some explosive disclosures. For example, it will present evidence how a Sikh leader was deported from the UK in December 1984, who was then tortured and imprisoned for several years without trial or charge in India. It may also call into question convictions of several Sikh activists in the UK in the 1980s when British intelligence are believed to have entrapped Sikhs using agent provocateurs that was claimed at the time by leading QC Michael Mansfield.

The number of Downing Street papers from the mid-1980s has fallen by 90% preventing proper scrutiny of a “divisive period” in British politics. Only 58 Downing Street papers from the 1986-88 period were released in December 2015 under the official 20-30 year rule system compared with around 500 papers released in every previous December since 2010.

The Foreign and Commonwealth Office (FCO) has a vast backlog of files (over half a million) and will fail to meet its declassification deadlines. FCO files on India (and many other countries) from 1983, 1984 and 1985 are still unavailable to the public, over thirty years later, and at a time when the government’s transparency agenda had introduced legislation that promised a streamlined “20 year rule”.

Andy Burnham said: “There are people today still campaigning for truth and justice relating to that divisive period in our country’s history. The actions of this government are putting yet more barriers in their way. There were a whole series of issues from the mid-1980s onwards that remain highly controversial and highly contested.”