London: On the 31st anniversary of India’s cowardly military assault on the Harimandar Sahib (Golden Temple) in Amritsar in June 1984, Sikh organisations the Council of Khalistan, Akali Dal UK and Dal Khalsa delivered a Memorandum to the UK Prime Minister’s residence urging the UK to revise its foreign policy toward India. It called for international pressure to force India to finally accept the right of self-determination as per international law. 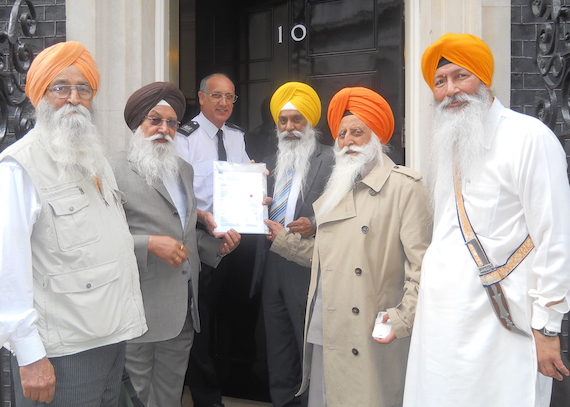 The document also highlighted the need for a progressive UK policy which puts human rights and the rule of law at the heart of all trade, aid and diplomatic dealings with a state that has an appalling record of massive, systematic human rights violations. The 1984 attack, in which thousands of Sikhs were killed and historic shrines were destroyed, triggered a Sikh independence movement which has only been repressed by further mass killings, disappearances, torture and illegal detention of political prisoners.

Amrik Singh Sahota, OBE President of the Council of Khalistan said the forces of Hindutva, led by the Modi government in Delhi, pose a real threat to Sikhs, Muslims and Christians alike in Indian controlled territory. The belligerence of the Hindutva state is also directed at China and Pakistan, making this a matter of regional concern. He said the freedom movements in Punjab and Kashmir face the most serious challenge, as was graphically demonstrated this week when Indian forces shot dead an unarmed Sikh youth in Jammu this week. It is, he urged, crucial for these movements to work together to defeat a colonialist and increasing fascist state. It was time for a coalition of nations and states, which were threatened by India’s militaristic and aggressive posture, to work together to safeguard their interests.

Raja Amjad Khan, Chair of the All Parities Kashmir Coordination Committee UK expressed sympathy with the bereaved Sikh family in Jammu and called on Sikhs and Kashmiris to redouble their efforts to secure self-determination in their respective homelands, in solidarity with each other against a common aggressor. He condemned India’s wanton use of force aimed at silencing the voice of the people and said this was an ultimately futile policy, as the democratic will of the masses can never, in the end, be defeated by such means.