London: The President of western part Kashmir, Sardar Masood Khan, was warmly received in the UK by Sikh activists in Birmingham on 27 October 2016. The President was nearing the end of a significant visit to raise awareness about the continuing plight of the people of “Indian occupied J&K” which has seen Indian forces kill scores of innocent civilians over recent weeks.

The meeting took place shortly after thousands of people protested in central London on the 69th anniversary of India’s military occupation of J&K – urging the UK government’s intervention to resolve the re-emerging crisis over the disputed territory. 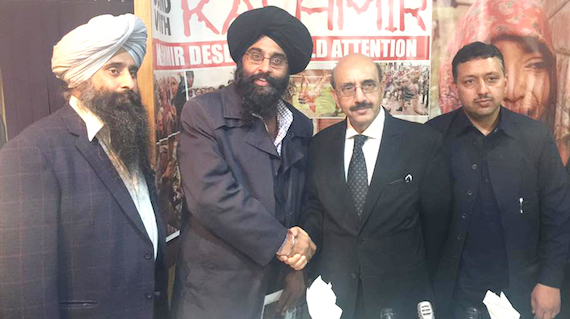 As per a written release Ranjit Singh Srai, who also serves as Administrative Secretary to a Westminster group known as ‘Parliamentarians for National Self-determination’ (PNSD), conveyed to the President a message of support for the Kashmiri people from the Council of Khalistan and other leading Sikh organisations including the Babbar Akali Organisation and the United Khalsa Dal.

Ranjit Singh Srai said the Sikhs condemned India’s oppression of unarmed civilians who were simply articulating the deeply held wish for an end to Indian occupation. “This was not only a brazen breach of India’s human rights obligations but also a manifestation of its illegal and immoral rejection of the right of self-determination”, he added.

Speaking on behalf of Lord Ahmed, PNSD’s Chair, he reiterated the need for India to immediately withdraw its notorious formal ‘Reservation’ against the right of self-determination, as enshrined in Article 1 of the 1966 International Covenant on Civil and Political Rights. That unlawful position, which has been officially opposed by many states, has led directly to bloody conflict in Kashmir, Sikh-majority Punjab and other regions such as Nagaland and Assam – costing hundreds of thousands of lives. In the light of such an appalling track record, both on the right of self-determination and other basic human rights obligations, it was farcical for Indian PM Modi to raise these issues with reference to regions within Pakistan.

“Modi, it should be recalled, was himself effectively banned from entering most Western capitals until relative recently, based on his personal record over mass killings in Gujarat in 2002”, said Ranjit Singh Srai.

Raja Amjad Khan, a prominent UK-based Kashmiri leader, spoke of the need for Sikhs and Kashmiris to forge an effective diplomatic front to counter Indian propaganda and to inform the international community of the reality of India’s aggression against nations in the region. It was time, he said, for human rights and justice to take precedence over the right-wing Hindutva forces that were threatening international peace and security on a level that should worry the whole of the global community.