London: As per a press release by the Sikh Federation UK [r]ecently there has been widespread “national and international” media coverage about the UK Sikh Survey 2016.

As per the release the on Dec. 20 the Sikh Network that developed and managed the UK Sikh Survey 2016, the largest and most comprehensive ever survey of UK Sikhs held a cross-government meeting with representatives from the Cabinet Office, Home Office, Department for Communities and Local Government, Department for Education, Government Equalities Office, Mayor of London’s office and the Association of Chief Police Officers, National Community Tension Team.

“Separate events are to take place with representatives from the Office for National Statistics, police forces around the country and the Foreign and Commonwealth Office where some of the specific issues will be discussed in more depth” reads the release. 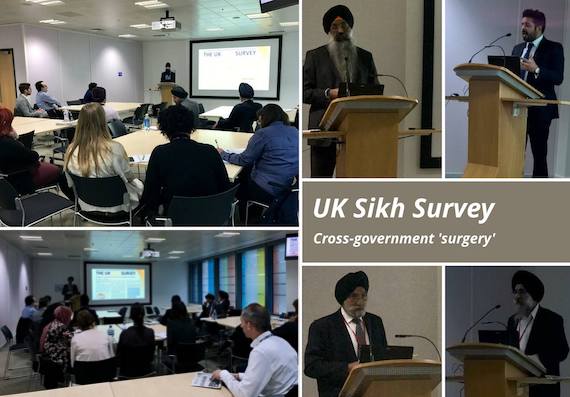 Presentations were given by five representatives of the Sikh Network. Dabinderjit Singh gave the introduction and presented the section on the Sikh identity. Sukhvinder Singh reported on discrimination, hate crime and grooming. Manvir Singh described the many positives emerging from the UK Sikh Survey in terms of education, employment and contribution to society. Randeep Singh provided context in terms of political activism and representation. Gurmukh Singh introduced the 45-minute discussion and question section”.

“The discussions began with a focus on the Sikh success story of integration and respect for British values, whilst maintaining the distinct Sikh identity and Sikh way of life. It has been suggested different parts of government may wish to point to the Sikh community as a role model community with respects to 69% of Sikhs are born in the UK, 91% have British nationality, Sikhs are the least likely to be unemployed, the huge number of Sikh sacrifices in the two World Wars, a very high level of Sikh political activism in terms of voter turnout and membership of political parties, the highest levels of educational attainment, a huge level of charitable contributions and the greatest levels of home ownership”.

“The discussions then turned to the pressing need for a Code of Practice for the 5Ks and turban to tackle discrimination and ignorance. Several options on the best way forward based on the guidance produced by the Equalities and Human Rights Commission were discussed. A proposal has now been put forward that is anticipated to get senior Ministerial support and a timetable has been suggested that is expected to result in a significant improvement on the current position possibly within the next six months or so.
The dialogue then moved on to discrimination and hate crime. It was admitted the position had shifted with regards to hate crime and plans were now in place to acknowledge the problem of Sikhs being targeted and the need to tackle under-reporting and incorrect recording by police forces. A steering group has been suggested to agree a realistic set of deliverables within the next 12 months. The Sikh Network is expected to follow up with a surgery with police forces to tackle discrimination and hate crime”.

“It was pointed out the UK Sikh Survey has highlighted many limitations of the Census 2011 data with regards to Sikhs that could only be addressed by the Census 2021 having a separate ethnic tick box. The conversation touched upon the low level of political representation in the Commons and Lords for Sikhs in comparison to other faith communities and the importance of government needing to work with grassroots Sikh organisations. In conclusion there was a short discussion on the need for the annual race audit of public services ordered by the Prime Minister, Theresa May in August 2016 needing to specifically consider Sikhs as a legally recognised and protected group”.

Dabinderjit Singh, one of the founders of the Sikh Network said: “The Sikh Network has exciting plans of holding a series of meetings by region, involving local decision makers and Sikh community representatives possibly beginning with London and working with the Mayor of London’s office. The aim is to try and hold these regional meetings over the next 6 months or so with a focus on the results of the UK Sikh Survey and three or four of the related issues in the Sikh Manifesto.”