London: The 550th Parkash Gurpurab of Guru Nanak Ji was marked with great accolade at City Hall overlooking the spectacular London skyline during the evening of Tuesday 19th November 2019.

The event was co-hosted by the Sikh Network, Sikh Federation (UK) and Dr Onkar Sahota, member of the London Assembly in close collaboration with the Mayor of London, Sadiq Khan. It was sponsored by Bond Wolfe Charitable Trust, Sri Guru Singh Sabha Gurdwara, Southall and London’s Punjab Restaurant. The event celebrated the life and teachings of Guru Nanak Ji focusing on his universal message of wellbeing “Sarbat da Bhalaa”, as well as providing some much-deserved recognition for individuals who have carried out great work on behalf of the Sikh community. 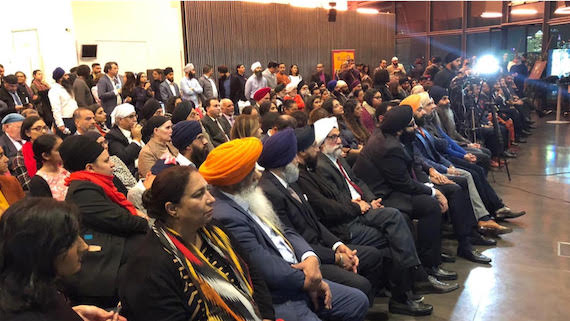 Opening and welcome speeches were delivered by a distinguished panel of speakers including Preet Kaur Gill, whom Sadiq Khan described as a true role model to many Sikh and non Sikh women. Preet was followed by the host for the evening Dr Onkar Sahota, who gave the floor to Deputy Mayor, Debbie Weekes-Bernard. In introducing Sadiq Khan, Mayor of London, Debbie congratulated the diverse audience congregated within the City Hall, Living Room on the Gurpurb of Guru Nanak Ji.

Sadiq Khan acknowledged the diversity of the audience gathered by saying it was the most diverse audience he had ever seen in his time at City Hall. He highlighted the great achievements and contributions of Sikhs in the UK and expressed admiration for the Sikh community that truly embodied the teachings of their Gurus, striving for equality, acceptance and oneness.

Satpal Singh, founder of Nanak Naam, keynote speaker for the evening emplored the audience to dig deep inside themselves to question the true meaning of oneness, of equality, of Sikh politics, unearthing popular, calming and peaceful depictions of Guru Nanak Dev Ji and shining light on the actual struggle Guru Ji faced in his lifetime whilst working to spread the message of Sikhi. Satpal Singh’s connection with the audience was clear from the awe-struck silence within the packed room. 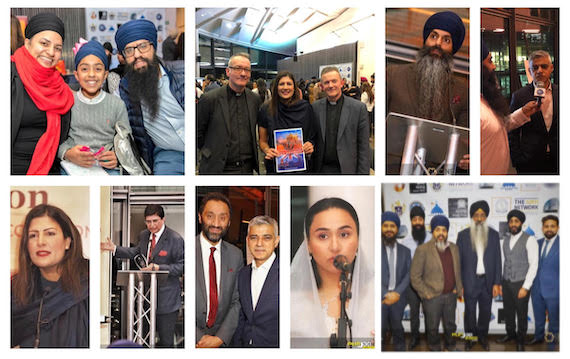 Jas Singh, founding member of the Sikh Network and co-author of the Sikh Manifesto and UK Sikh Survey encouraged audience members to come forward to become ‘activists’ and adopt Guru Nanak Dev Ji’s teachings shared by Satpal Singh. “Sikhi is not a spectator sport,” he cited and urged Sikhs to pursue the truth and engage on issues important to the community, issues clearly outlined in the Sikh Manifesto 2020-2025.

Canon Mark Poulson, Canon for inter-faith relations at St Paul’s Cathedral and for the Diocese of London spoke eloquently on the role of Sikhs as a bridge between societies and the need for their true values to shine through particularly now, at a time of social unrest and changing political climate.

Dabinderjit Singh, OBE, long serving director at the National Audit Office and principal adviser to the Sikh Federation (UK), emphasised the evening was about celebration, inspiration and recognition, but this year it was also about appreciation. He highlighted the importance of Guru Nanak Dev Ji’s message that those who choose the Guru’s Path should not listen to what others say and never flinch from performing righteous deeds. He revealed to guests the specialy commissioned 550th Guru Nanak Dev Ji Parkash Gurpurb gold coin that everyone was given to take away and treasure. Also tucked in their goodie bags was a donation pledge card to allow guests to show their appreciation for the Kartarpur Sahib Yatra Committee who are undertaking a significant accomodation building project to provide UK pilgrims with first class facilities. Guests were also given a glimpse of the Sikh Manifesto 2020-2025 that will be formally launched at Guru Nanak Gurdwara, Smethwick on Saturday 23 November and in Glasgow on Sunday 24 November.

In line with previous events, a small award ceremony was held to provide recognition to various individuals and organisations who have gone above and beyond in the last year in their work for the Sikh community. The following were awarded for their contribution in their own fields of work.

Sahibzada Jahangir, spokesman for Prime Minister of Pakistan for Trade & Investment in UK & Europe, graciously received the Lifetime achievement award on behalf of Imran Khan, the Prime Minister of Pakistan. He suggested the Kartarpur Corridor reinforced the idea of Sikhs as a bridge between cultures and countries. He went on to express how honoured the PM would be to receive this recognition and how keen he was to support Sikhs visiting Pakistan.

The event concluded with remarks from two of the event’s Sponsors, Harmeet Singh, youngest ever General Secretary of the most iconic Gurdwaras in London, Sri Guru Singh Sabha, Southall, and Amarpal Singh, owner of Punjab Restaurant.

Manchandan Kaur from the Sikh Network commented on the event:

“This truly was a remarkable event; the best turnout we have had in the five years we have held this event. The move from Parliament to City Hall to mark the 550th anniversary of Guru Nanak Dev Ji’s Gurpurb was positively received by our esteemed guests. It is our hope that each of our guests left the evening with a glimmer of Guru Ji’s message inside them. The universal message of wellbeing “Sarbat da Bhalaa”. Guru Nanak Dev Ji explained the importance of equality of all human beings, regardless of gender, birth or creed. He stressed the need for social responsibility and an active concern for others. We are blessed today to have an incredible array of male and female Sikh role models to inspire us too, many of whom joined us to mark this once in a lifetime occasion.”

The event was recorded by KTV (Sky770) and will be broadcast in the coming days via TV and social media pages. Once again, the Sikh Network and Sikh Federation (UK) would like to thank everyone who supported this remarkable event the sponsors and media partners.