The UK based diaspora Sikh activists group maintained that the said network has already attracted more than 600 members with a reach of over 200 MPs from six different political parties across the UK. 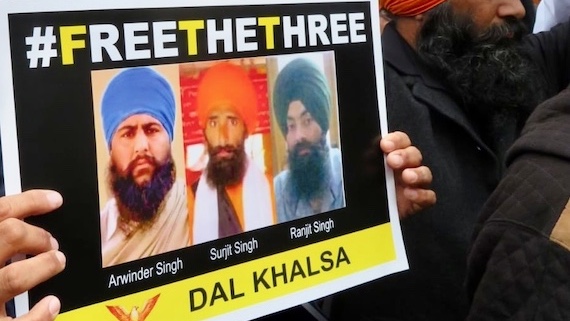 Gurjeet Singh, press secretary of the Sikh Federation UK informed: “one of the first issues taken up was that of three Sikh youth given life imprisonment in India for “waging war” against India for simply possessing books, pamphlets and photographs”.

The three – Arwinder Singh (29) of Nawanshahr, Surjit Singh (27) of Gurdaspur and Ranjit Singh (29) of Kaithal in Haryana – were convicted on 31 January and sentenced to imprisonment for life on 5 February 2019.

“Within a week of the sentencing the Dal Khalsa that is closely associated with the Sikh Federation (UK) held a sit-in protest on the doorsteps of the court that convicted them as the judgement has far reaching implications on the right to dissent and the right to free expression”, the press release by Sikh Federation UK reads.

Legal experts have termed it a first-of-its-kind case where the accused have been sentenced to life imprisonment on recovery of incriminating literature and not any ammunitions or for an act of violence.

Sikh Federation UK said: “the court concluded the literature was for propaganda that could be used to incite people to campaign for a Sikh homeland. However, there has been widespread uproar by Sikhs across the globe, including Punjab and politicians from different political parties in Punjab have criticised the extremely harsh sentences”.

The letter to MPs states this “represents a serious breach of the Universal Declaration of Human Rights as international law protects the right to freely express opinions and ideas. The right to freedom of opinion and expression is a foundation stone of a democratic society and the right is also essential at an individual level.”

“In practice it is already extremely difficult for Sikhs to raise their voice on their right to self-determination. Many see the court judgement in this case as having overstepped the mark to crush all peaceful dissent.”

“UK MPs, including Ministers appreciate the dire situation the Sikh minority finds itself in India and we are confident that co-ordinated lobbying across the globe can eventually result in international invention to allow Sikhs to exercise their right to self-determination.”