UK: Tens of thousands call for action on anniversary of Sikh Genocide 1984

London: Tens of thousands of Sikhs from across the UK today gathered in central London to commemorate the 31st anniversary of the June 1984 attack on the Sri Harmander Sahib Complex. T

he event today showed solidarity with 82-year old Bapu Surat Singh, a US resident, under arrest in hospital in India for protesting by going on a hunger strike. It is believed he is again being forcibly fed in hospital as he nears 150 days of his hunger strike. At the end of the event Chaupai Sahib was recited for Sikh political prisoners that still remain in Indian jails. 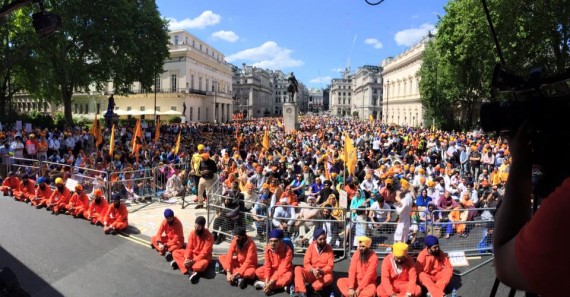 Numbers also increased at the event as British Sikhs are deeply concerned with the deteriorating law and order situation in Jammu and Punjab. Jashjeet Singh an unarmed 23- year old who had gone to buy medicine for his family was shot in the head by police in Jammu three days ago and died on the spot. Other Sikh protesters sustained injuries in the police firing. Raj Kaur, Jasjit Singh’s mother has now suffered a double tragedy having lost her brother Sujjan Singh and his son Parvinder Singh to the Nepal earthquake. 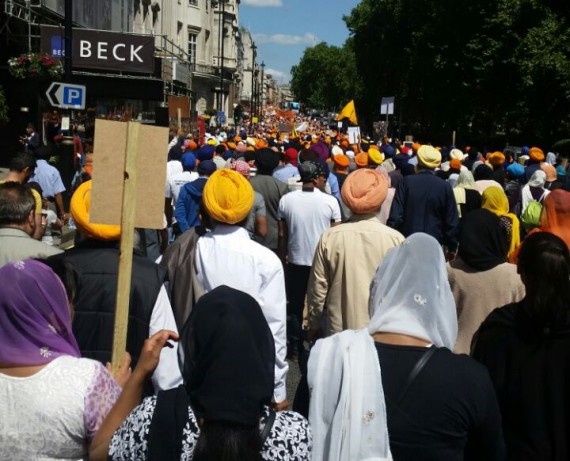 A view of Ghallughara remembrance march in London [June 07, 2015]

The unrest in Jammu ironically started as police helped Shiv Sena activists remove posters relating to an event to mark the 31st anniversary of the Sikh Genocide in June 1984. Shiv Sena is a Hindutva group that has previously been banned in India having been responsible for communal violence, but is now being promoted by the current Indian government. Posters were removed on 3 and 4 June and police officers were found guarding the spots from where the posters were removed. The police then started rounding up Sikh youth on the morning of 4 June. When Sikhs objected to these heavy handed police actions the police opened fire indiscriminately at the unarmed Sikh protesters. Jasjit Singh who has been killed was not even one of the protesters.

A curfew and media blackout has been imposed in Jammu reminding Sikhs on the situation in Punjab 31 years ago. There is a real possibility of further unrest as the Indian authorities have provoked a reaction from Sikhs at this very sensitive time of the year.

To restore Sikh community confidence in the UK Government a letter was delivered to David Cameron renewing calls that it was essential for an independent public inquiry into UK Government military assistance in the June 1984 attack on the Sikhs’ holiest shrine. Sikhs have demanded the inquiry should be extended to look at pressure from India in its’ attempts to deny British Sikhs the democratic right to protest to highlight the Genocide of Sikhs and expose widespread human rights violations in India.

Disclosures from 1985 under the 30 year rule have raised further questions on restrictions imposed on law-abiding Sikhs and it is also clear information continues to be withheld that has added to the lack of confidence in the adequacy of the Cabinet Secretary’s report presented to Parliament last February. The letter to the Prime Minister said too many questions remain unanswered.

The public at large have a right to know the truth of how the UK Government 31 years ago assisted India to cover up the Genocide of the Sikhs in 1984. Over 150MPs elected on 7 May from across the political spectrum, including dozens of Conservative MPs back an independent public enquiry. A number of Conservative Ministers have also indicated they have an open mind on the need for a further inquiry.

Bhai Amrik Singh, the Chair of the Sikh Federation (UK), said: ‘We expect calls for an independent judge-led public inquiry will officially come from all the main opposition parties and we are confident a majority of MPs in the Commons will back us. ’The letter to David Cameron said it would be better if he took the lead in announcing such an inquiry at the earliest opportunity so the truth of UK involvement can be finally established and attention can be focused on those responsible for the Genocide.

David Cameron has also been urged to recognise the systematic, pre-planned and deliberate killing and physical destruction of Sikhs in June 1984, in the months that followed and in November 1984 individually and collectively as a Genocide as defined by the United Nations in 1948. The letter said assurances were given by Conservative Ministers to British Sikhs some twelve months ago that concerted action would be taken following a change of government in India. The Union Home Minister Rajnath Singh inDecember 2014 referred to what happen to the Sikhs in 1984 as a ‘Genocide’ and that ‘justice would be meted out to the victims only when the perpetrators of the crime are punished’.

Bhai Amrik Singh continued:‘We have serious doubts if any Indian politicians or the judiciary are capable of delivering anything approaching justice given the experience of the Sikh Nation over last 31 years. The UK Government should join other Permanent Members of the UN Security Council to call for a UN-led investigation into the Sikh Genocide of 1984.’

‘We also urge the UK Government to recognise and accept the Sikhs right to self determination and challenge India at the UN Human Rights Council to recognise this basic human right for all people within its territory. You should release all relevant papers from 1947 relating to the Britishoffer of a separate Sikh homeland prior to partition and the formation of Indiaand Pakistan. We understand the British offered a ten year agreement, including military assistance and support for the Sikh administration.’

The letter to David Cameron said Britain has a unique historical, legal and moral responsibility towards the Sikhs. The UK Government should facilitate a diplomatic solution to resolve the conflict between the Sikhs and India. International law allows for the Sikhs to exercise the right to self-determination, including the call for outright independence given the experience and betrayal of the Sikhs since 1947. Sikhs have had no justice in the last 31 years and our experience to date suggests Sikhs will never get justice in India. The Genocide of the Sikhs that began 31 years ago in June 1984 laid the foundation stone for an independent Sikh State, Khalistan.