UK: Tens of thousands to call for action on anniversary of Sikh Genocide

London, Punjab: Tens of thousands of Sikhs from across the UK will gather in central London on Sunday 7 June to commemorate the 31st anniversary of the June 1984 attack on the Sri Harmander Sahib Complex (often referred to as the Golden Temple Complex).

Sikhs will gather in Hyde Park between 11am and 1pm and march through central London before holding a rally in Waterloo Place between 2-5pm. At a point in the march Chaupai Sahib will be recited for Sikh political prisoners and 82-year old Bapu Surat Singh, a US resident under arrest for protesting by going on a hunger strike that is approaching 150 days.

Chaupai Sahib is a hymn that offers protection and security and Sikhs recite it to gain self-confidence and spiritual safety. It provides an upbeat feeling and defence from external enemies. 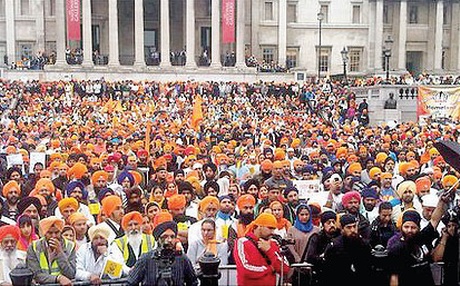 Tom Watson MP, the clear favourite to become the new Deputy Leader of the Labour Party who last January led the calls for transparency on UK Government assistance in 1984 will address those gathered.

The former SNP leader, Alex Salmond MP is also expected to address the tens of thousands gathered and focus on the importance of the Sikhs right to self determination.

British Sikhs will renew calls on David Cameron to restore community confidence by announcing an independent public inquiry into UK Government military assistance in the June 1984 attack on the Sikhs’ holiest shrine.

They will also ask the inquiry to be extended to look at pressure from India in its’ attempts to deny British Sikhs the democratic right to protest to highlight the Genocide of Sikhs and expose widespread human rights violations in India.

Disclosures from 1985 under the 30 year rule have raised further questions on restrictions imposed on law-abiding Sikhs and it is also clear information has now been withheld that has added to the lack of confidence in the adequacy of the Cabinet Secretary’s report presented to Parliament last February.

Bhai Amrik Singh, the Chair of the Sikh Federation (UK) said: ‘Too many questions now remain unanswered. The public at large have a right to know the truth of how the UK Government assisted India to cover up the Genocide of the Sikhs in 1984.’

‘David Cameron cannot ignore over 150 MPs elected on 7 May from across the political spectrum, including dozens of Conservative MPs who back an independent public enquiry.’

Sikh representatives will deliver a letter to 10 Downing Street after the rally requesting the Prime Minister to recognise the systematic killing of Sikhs in June 1984, in the months that followed and in November 1984 individually and collectively as a Genocide.

They will also call for justice for the victims and remind the Prime Minister assurances were given by Conservative Ministers to Sikhs some twelve months ago that concerted action would be taken following a change of government in India. The Union Home Minister Rajnath Singh in December 2014 referred to what happen to the Sikhs in 1984 as a ‘Genocide’ and that ‘justice would be meted out to the victims only when the perpetrators of the crime are punished’.

Bhai Amrik Singh added: ‘There are serious doubts if any Indian politicians or the judiciary are capable of delivering anything approaching justice given the experience of the Sikh Nation over last 31 years.’
‘The UK Government should join other Permanent Members of the UN Security Council to call for a UN-led investigation into the Sikh Genocide of 1984.’

The third demand of the Sikhs is for the UK Government to recognise and accept the Sikhs right to self determination and challenge India to also recognise this basic human right for all people within its territory.

Following on from the Sikh Manifesto released in January this year Sikhs will also call for the release of all relevant papers from 1947 relating to the British offer of a separate Sikh homeland prior to partition and the formation of India and Pakistan. It is understood the British offered a ten year agreement, including military assistance and support for the Sikh administration.

Bhai Amrik Singh added: ‘Britain has a unique historic and moral responsibility towards the Sikhs. The UK Government should facilitate a diplomatic solution to resolve the conflict between the Sikhs and India.’
‘International law allows for the Sikhs to exercise the right to self-determination, including the call for outright independence given the experience and betrayal of the Sikhs since 1947.’