Moga: An unidentified person has reportedly taken the responsibility of beadbi of Guru Granth Sahib at Malke village in Moga. As per information the granthi of the Gurdwara Sahib (Dera Baba Kaul Dass) of village Samalsar (Moga) yesterday found that a letter was laying in front of Guru Granth Sahib. It was photocopy of a handwritten letter.

Granthi Jaspal Singh said that he was shocked to read the letter as the author had claimed that he had committed the beadbi of Guru Granth Sahib and the principle of Sunbeam school was also involved in it. In this letter the unidentified author said that he would expose his name only after arrest of the principal. 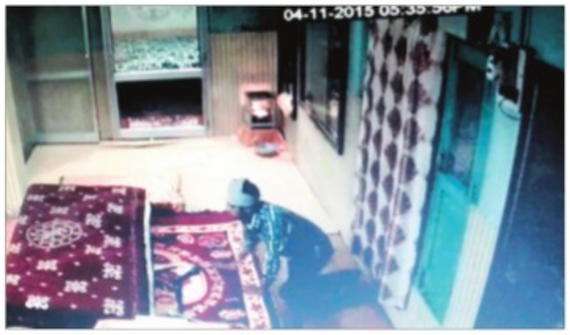 The mysterious author further said that he would expose himself once principal Puran Singh was arrested by the police and warned that similar incident of the beadbi would take place in Samalsar village if the police fails to follow his directions (regarding arrest of the concerned principal).

The person who left the letter in the Gurdwara Shaib was reportedly caught on CCTV camera. SSP Moga Mukhwinder Singh, SP(D) Harjit Singh Pannu, DSP (Bagha Purana) Jaspal Singh and SHO (Bagha Purana) Partap Singh said that the police have taken CCTV footage under it’s control. They said that the police have started the process to identify the person on the bases of image recovered from the CCTV camera but none of the villager were able to identify him.

On the other hand Sunbeam School principal Puran Singh has expressed ignorance over the issue. He said that he would co-operate with the police for investigation in this matter. During yesterday’s probe proceedings principle Puran Singh was also present at village Samalsar.

SSP Moga said that as per face value it seems to be a case of personal rivalry but the police would investigate all aspects of this case.