Patiala, Punjab: In recognition of Malaysia Director Rishiwant (“Rishi”) Singh’s global humanitarian legacy, the United Sikhs has announced a memorial fund that will help support his grieving family and continue the work of the humanitarian projects he founded. On Nov. 25, Rishi Singh died in a motorbike accident near Guru Nanak Ashram while trying to avoid a collision with another two-wheeler. He was rushed to Government Rajindra Hospital, where he succumbed to his fatal injuries. At age 44, Rishi is survived by his wife and three children.
“He is a true humanitarian, a good person who wanted to help people whenever he could,” Rishi’s wife, Malkeet Kaur told the media. “We are heading to India soon to make the necessary arrangements.” 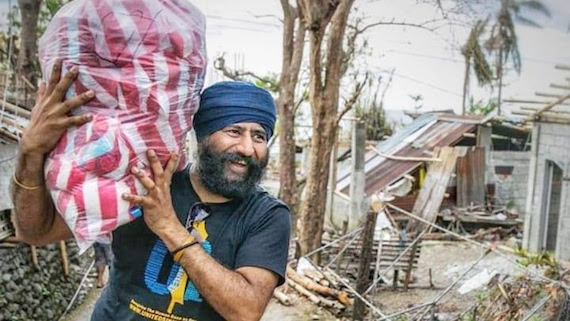 Rishiwant Singh and a team of 15 Malaysian citizens were in Indian subcontinent to serve at the Guru Nanak Ashram when the tragic accident occurred. To provide assistance with travel and funeral costs for Rishiwant Singh’s family, as well as long-term support for the education needs of his children, United Sikhs has established a GoFundMe campaign online. Funds raised will also contribute to the many humanitarian projects in Malaysia that Rishi founded and leaves behind as his legacy.

3. Malaysia Humanitarian Relief Missions — created to help tribal families and the underprivileged recover from natural disasters year-round. To date, United Sikhs has provided local tribes with 100 tons of relief supplies, including food rations and given medical care to more than a 1,000 Temiar natives, who were stranded since the worst–ever Malaysian floods hit Kelantan in December 2014.

Known as “The Flying Singh,” Rishiwant Singh often led many humanitarian missions first-hand, overcoming any obstacle by air, land and sea to reach communities in need. In 2016, he was presented with The Star Golden Hearts Awards in recognition of his humanitarian initiatives.

“Rishi’s spirit of selfless service to humanity will never be forgotten,” said United Sikhs International Aid Director Gurvinder Singh. “He embodied the true essence of a sevadaar and inspired many to follow in his brave footsteps to uplift communities in need through any crisis. In his honor, we will commemorate his legacy by continuing the humanitarian initiatives he founded in Malaysia and around the world.”

“I met Rishi in person in Brisbane for a Good Will Walk 2016 and what an energetic person he was. As we all know your first impression is the last impression. There was a very positive vibe that came from him about his vision of serving the community. I asked him how does he cope up with his family and seva? His reply was: “It does not matter how long you are spending on this earth, how much money you have gathered or how much attention you have received” Gurvinder Singh, Director United Sikhs Australia

“Rishiwant was a true warrior for United Sikhs, every time I would speak to him I would always feel energy and passion in his words. This reflected on the humanitarian aid missions we would assign him to, he was like a one-man army. Rishiwant Singh you made us so proud, you would set up aid camps so swiftly and with ease, sevadars like you are hard to find. Your drive of wanting to do more is inspiring and we will keep those dreams alive and fulfil them.” Sukhwinder Singh, Director United Sikhs Canada

“Rishiwant Singh your spirit and gusto is something I will never forget. You showed us all that nothing is impossible and that was evident when you managed to get a helicopter to distribute aid on Kelantan Flood Relief 2014. We at United Sikhs have lost a true humanitarian. You are in our thoughts and prayers; may you rest in peace. Going to miss you brother!” Sun Kaur, Director United Sikhs UK.