Chandigarh, Panjab: United Sikhs have once again urged visiting French President Francois Hollande to reverse the turban ban in France. In a letter submitted to the French President on the eve of his visit to Chandigarh, United Sikhs reminded him that French Sikhs continue to be deprived of their right to wear a turban, even though, in the three cases that our legal team had filed against the ban, the UN Human Rights Committee (UNHRC) had directed France to provide an effective remedy to those whose rights have been violated by the turban ban. 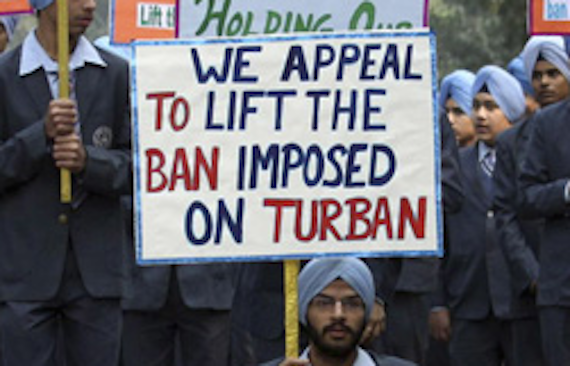 “The Sikh Nation, whose members live in more than 100 countries, share with you and the French people a deep sense of sorrow about the Paris terror attacks of 13th November 2015, which left 130 people dead. The Paris attacks remind the world that Nations must work together to protect the fundamental rights of all, which includes the right to life. Sikhs in France, in response to their civic and national calling, stood in solidarity with their fellow citizens, when they donated blood at the L’Avicenne hospital and served hot tea to mourners who turned up in the cold to remember the dead at Le Republique square on 22nd Nov 2015,” Mejindarpal Kaur, United Sikhs International Legal Director said in the letter that was delivered to the French Ambassador on Saturday.

“Today we reiterate the need to defend the equally important fundamental right to practise one’s faith, which has been denied to people of all faiths by the French ban on religious signs and headdress in schools and on ID documents photos since 2004,” she said in the letter.

“We feel honoured that during your short visit to India, you have chosen to visit Chandigarh, the capital of Panjab, a State where 16 million Sikhs live. During your visit you would have noticed that Sikhs wear a turban with pride and honour. We hope you will take home the message that a Sikh and his turban is never parted. In 2013 when Sikhs faced issues with a similar ban on the turban in some Belgian schools, United Sikhs had approached Mr. Pierre.

VAESEN, the Ambassador of H.M. the King of the Belgium. Whilst endorsing the importance of the Sikh turban he had said that he understood fully that the turban is an integral part of the personality of a Sikh. Happily, in 2014, United Sikhs lawyers won the case against the errant Belgian schools before the Belgian Conseil D’etat,” said Gurpreet Singh,United Sikhs-India Director, who cosigned the letter.