Meerut, UP, India (August 05, 2014): Situation remained tense in Meerut district of Uttar Pradesh after a 20-year-old woman from Kharkhauda village claimed that she was gang-raped and forced to convert to Islam in a local Madrassa.

What is the incident? 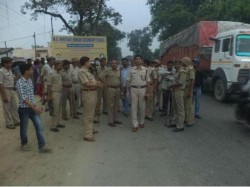 As per a TOI report, “Allegations are that Nawab, his brother Sanaullah, his wife and their daughter kidnapped the girl on July 23. She was allegedly taken to a madrassa in Hapur area where she was allegedly raped by Nawab, a priest of the school and four others. Thereafter, she was forced to sign some papers which supposedly declare that she had converted to Islam and married Nawab.”

According to media reports the girl was also kept in confinement for nearly 3-4 days from where she managed to escape and reached Kharkhauda and narrated the whole incident to her family.

This news spread like a wildfire in the town which led to tension in Meerut which already tops the list of communally sensitive districts in Uttar Pradesh and a mob came out on roads to protest against the incident.

What the victim told police?

According to Indian media reports the woman narrated her ordeal to the police after escaping from her abductors.

“They (kidnappers) forced me to go in for religious conversion in Dotai madrasa of Hapur district on July 31 and named me Bushra Jannat”, she was quoted as saying by the police.

The woman also told the police that around 40 girls from Bihar and West Bengal were confined in the same place and they would be trafficked to Gulf countries.

As per media reports a case was registered by the police against Kharkhauda village chief Nawab Khan, the head of the madrasa, Mohammad Sanaullah, his wife Shabnam, his daughter Nusrat and Mohammad Mustafa, a resident of Muzaffarnagar. Nawab Khan and his wife were later arrested.

According to reports the madarsa was also raided later in the day and police found 40 girls were registered for several courses. The police also found that 16 girls were not attending classes for the past few days.

K. Satyanarayan, the DIG of Meerut range, said: “The medical examination has confirmed that the woman was gang-raped. Police have arrested a man and a woman. Dinesh Kumar, the SHO of Kharkhauda, has been attached to the police line.”

M.M. Beg, SP (rural) of Meerut district, said, “Two accused have been arrested and police teams have been constituted to nab other culprits.”

The news caused communal tension in the district.

In a live discussion on Zee News channel BJP leader Savita Paatra said that the incident was part of a large conspiracy involving forcible conversions and human trafficking.

UP government under fire:

In wake of Meerut incident, the Akhilesh Yadav government is again under sever criticize by political opponent. BJP leaders are accusing SP government in UP for deliberately suffering failure to curb the incidents of lawlessness and gang-rapes. BJP leaders have issued statements that a “particular community” is being treated politely by UP government.