New York: For the first time in five years, a decorated Sikh American has been granted a temporary 30-day religious accommodation to serve in the U.S. military while maintaining his Sikh articles of faith. This landmark accommodation, which will be confirmed or reversed by January 8, 2016, represents the first for an active duty Sikh requesting to maintain his articles of faith after serving in the military.

Upon entering West Point — where he graduated with honors in 2010 — Captain Simratpal Singh was forced to make the untenable choice between his religion and service to his nation. After failed attempts to obtain an accommodation, Captain Singh succumbed to the pressure of conformity and cut his hair and shaved his beard in an effort to fulfill his longtime sense of obligation to serve his country.

Nearly a decade later, after successfully completing the Army’s grueling Ranger School, earning a Bronze Star for clearing roads in Afghanistan of explosive devices, and receiving numerous other military accolades in various military positions, Captain Singh’s one regret was compromising his religion in order to serve his country. 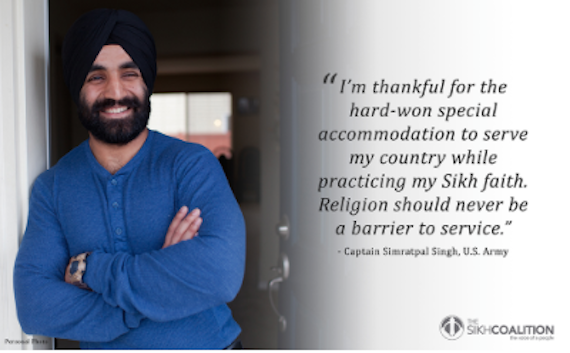 “My dream has always been to serve my nation while proudly wearing my Sikh articles of faith,” said CPT Singh. “I thank the Sikh Coalition for their tireless advocacy in my case and their work on behalf of every Sikh who faces discrimination by any employer in the United States.”

The Sikh Coalition, which represents the three Sikh clients who have obtained previous religious accommodations along with the law firm of McDermott Will and Emery LLP, is heartened by this preliminary decision for Captain Singh, but continues to call on the U.S. military to end its presumptive ban on service by observant Sikhs. The Becket Fund, which also co-counseled in Captain Singh’s accommodation case, has joined the demand for permanent policy change.

“It is once again clear that the Army’s leadership recognizes that nothing about the Sikh articles of faith prevents Sikhs from excelling in military service,” said the Sikh Coalition’s Legal Director, Harsimran Kaur. “Captain Singh is another proof positive example that illustrates that the ban on observant Sikhs is unnecessary. We look forward to Captain Singh’s accommodation becoming permanent.”

Last month, 27 retired U.S. Generals called on the U.S. department of Defense to eliminate the ban. This letter joins the 105 Members of Congress, 15 U.S. Senators, and 21 national interfaith and civil rights organizations, who have previously signed letters in support of American Sikhs’ right to serve.

“Permanent accommodation of Captain Singh will open the door for other Sikhs who are seeking an accommodation,” said McDermott Will & Emery LLP partner, Amandeep Sidhu. “The writing on the wall is clear – Captain Singh’s accommodation should be made permanent and the time is now for a comprehensive policy change.”