A written statement by the Sikhs for Justice informs:

A US Federal Court in New York has issued summons against Manjit Singh G.K., President “Delhi Sikh Gurudwara Management Committee” (DSGMC) on the charges of using torture as tool to wrest the control of top Sikh body.

July 10 complaint filed by victims under “Torture Victim Protection Act” (TVPA) of 1991 seeks punitive and compensatory damages against DSGMC President. TVPA allows filing of lawsuits in the United States against the individuals who committed torture on a foreign soil.

Plaintiff Harjit Singh, a former ally of Manjit Singh GK and active supporter of SAD (Badal) alleges that a reign of death threats and torture was unleashed by police at the orders of GK after he refused to extend support and campaign for him during 2013 elections.

Janki Kaur, a widow of 1984 Anti-Sikh violence alleges that she was harassed in front of GK when she went to claim compensation at DSGMC head office at Rakab Ganj. Although compensation was approved eventually but she was threatened by GK not to report the mistreatment to the media.

Federal Judge James C. Francis has been assigned to hear the allegations of death threats, illegal detention and physical abuse against Manjit GK, who also heads Delhi Unit of SAD (Badal), a political party that is controlling the State of Punjab.

14 page complaint alleges that “while torture is a very common phenomenon in India as the authorities routinely use torture as means for extracting confession, however, the instant case is different from all other cases because here the torture was used by the defendant Manjit Singh G.K. as a tool for securing electoral victory and to gain the control of an all powerful and opulent representative organization, Delhi Sikh Gurudwara Management Committee “DSGMC”.

“The tactics used by the defendant Manjit Singh G.K. with the help SAD-Badal and Punjab Police to secure electoral victory created such an atmosphere of terror in Delhi that it resulted in remarkable low voter turnout”, the complaint further alleged.

“G.K is a master piece of how political leaders use state machinery with impunity to win elections and gain control of representative bodies”, stated attorney Gurpatwant Singh Pannun legal advisor to “Sikh For Justice” (SFJ).

“Since GK enjoys patronage of SAD-Badal an ally of ruling BJP, the victims were forced to approach the US Federal Court”, added attorney Pannun.

G.K is heading a SAD (Badal) delegation in the United States and at the behest of Party President Sukhbir Badal, is seeking the support of Punjabis for the 2017 elections. 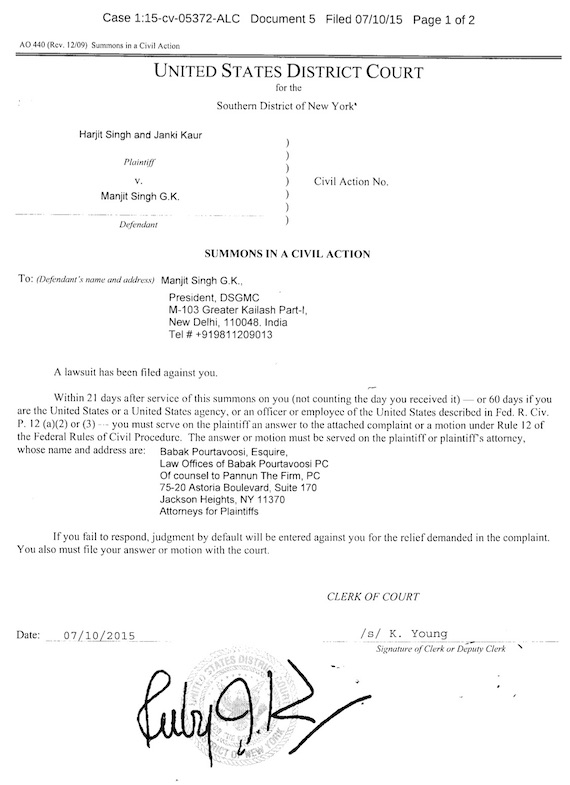 A copy of summons against Manjit Singh G.K.