Sikh Genocide 1984: US court to hear arguments against Sonia Gandhi on Aug. 18

New York: A US Federal Court of Appeals has calendared oral arguments in rights violation case filed against Sonia Gandhi for August 18. The lawsuit had alleged that Congress President was shielding, protecting and rewarding the perpetrators massacre of November 1984 when thousands of innocents Sikhs were killed in the aftermath of assassination of Indira Gandhi.

The Court located in Manhattan is set to hear the oral arguments on the issues : “whether the 1984 claims are barred under US Supreme Court case Kiobel v. Royal Dutch Petroleum; if individuals Jasbir Singh and Mohinder Singh are proper plaintiffs on behalf of their family members and whether rights group has associational standing to file the lawsuit”. 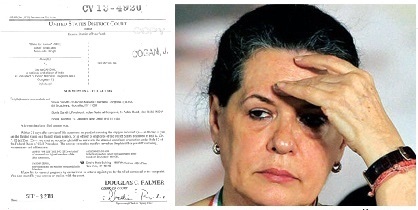 In June 2014 Federal Judge Brianb M Cogan dismissed the lawsuit against Sonia Gandhi. He had granted Sonia Gandhi’s motion to dismiss the case for lack of subject matter jurisdiction and failure to state a claim. However the judge denied Congress President’s motion for “anti suit injunction” seeking to prevent human rights group from filing any further law suits.

About the allegations that Gandhi shielded, protected and rewarded the perpetrators of the anti-Sikh riots after she took office in 1998 judge Cogan in order in June last year had held that these allegations would not state a claim under any theory of aiding and abetting liability that might conceivably be cognizable under the Torture Victim Protection Act (TVPA).

The Sikh Rights group and 1984 victims in their appeal before the appeals court has invoked the principle of international law that “those who cover up a crime are just as guilty as the ones who commit it”. The allegations against Sonia Gandhi includes shielding and protecting Kamal Nath, Jagdish Tytler, Sajjan Kumar and other Congress leaders who lead death squads during November 1984.

“We have a strong argument that US Supreme Court’s decision in Kiobel v. Royal Dutch Petroleum does not bar the law suit against human rights violators when the victims have no other recourse”, said SFJ legal advisor Gurpatwant Singh Pannun. “In Sonia Gandhi’s case the victims have been granted refugee status and thus have a strong enough connection to US to satisfy the “touch and concern” requirement as laid down by the Supreme Court” he added.

In September 2013, a class action suit was filed against Sonia Gandhi by SFJ and victims of 1984 under Alien Tort Claims Act (ATCA) and Torture Victim Protection Act (TVPA) for shielding and protecting Congress party leaders who organized violence against Sikhs in 1984.