Hartford, Connecticut, USA: In first of its kind the General Assembly of State of Connecticut in USA along with a US Senator and eight cities of Connecticut recognised November 1 as the Sikh Genocide Remembrance Day. 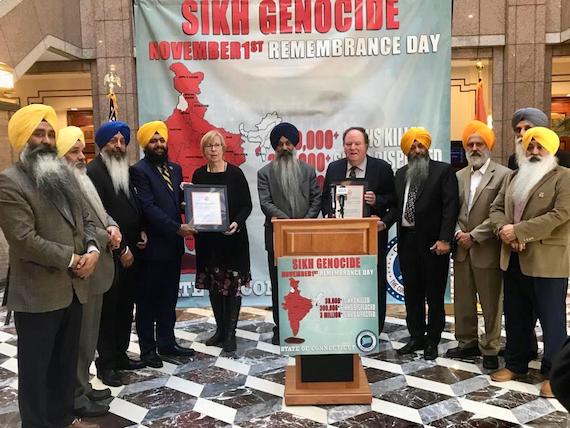 Swaranjit Singh Khalsa, President Sikh Sewak Society International (USA) and Member of the World Sikh Parliament (WSP) said that “despite of interference and false representation by Indian Consulate to Connecticut State Governor, State Senators and other elected oﬃcials, we commemorated 34th anniversary of Sikh Genocide”. “I respect the fact the our elected oﬃcials understand the pain of Sikh Community and stand in solidarity with Sikh Nation”, he added.

He emphasised that it was very important to correct the mischievous propaganda of the Indian state and tell the world that the violence against the Sikhs by Indian State in 1984 was in fact a genocide and not the riots as propagated by the Indian state and Indian media.

“1984 Sikh Genocide was sponsored by government of India and Indian elected oﬃcials were involved in that target killing of Sikhs in Delhi and rest of India” he added.

The Indian state try to show world that it was Communal fight between Hindus and Sikhs but it was not, added he.

Speaking on the occasion the State Senator Cathy Osten said: “I remember when we first started talking about the genocide which happened in 1984 and quite frankly I was appalled. But I did my research to make sure that… and I would like to call up my colleague Kevin Ryan who is also here today… because I think it is something that is doomed to happen over and over if we don’t recognize it and that’s something that I think is important for people to know, and … I was talking a little bit earlier today and I received a letter. It’s basically a form letter… they (India) crossed out the “going to” and put my name and it’s not a letter of great import from my perspective from India. And it said….as I have…I will just read the one paragraph that I think sort of shows the denial of what has happened. It says: “as I have explained before, the anti-Sikh violence had its roots in years of terrorism perpetuated by Sikh terrorists and cannot be subject to selective analysis. The purpose of the people who persuaded you to support this State Resolution is to weaken the India Union through divisive policies and this you will agree that we cannot allow to succeed. And I do agree that we should never allow divisive politics to be the order of the day. BUT as in any case where genocide has happened, the perpetrators of that genocide say “it wasn’t me” and they often blame the victims saying that “it was what they (victims) did that brought this about. I would liken this to the Holocaust when the people said that “the Holocaust did not happen” and people today would still say “the Holocaust did not happen”, “those people did not really die”, “the death came was not real”. BUT they (the Holocaust) were real and this (Nov 1984 Sikh Genocide) was real. And I would expect that the Government of India would recognize that and stand up and say “We made a mistake”. Its’ also true that the United States occasionally makes mistakes. And we also have to recognise when we do so, because in order to move forward you have to recognise what you did that was wrong, even if you were not the one who perpetuated it. But this is still being perpetuated and we need to stop it. And I am very proud to be here today.”

On this occasion a message of Bhai Jagtar Singh Hawara was also read which was welcomed by Sikh Community with slogans of “Khalistan Zindabad”.

At the end of the event Swaranjit Singh Khalsa thanked everyone for coming and standing by truth.