Phoenix, Arizona: Daljeet Singh, a Sikh man who was detained by other passengers on a Greyhound bus and arrested at gunpoint for the “crime” of vaguely looking like what a Middle-Eastern Muslim might look like and speaking a foreign language, is demanding that Texas cops arrest the private citizens who falsely detained him, NBC News is reporting.

Daljeet Singh was recently granted asylum in the U.S., and on February 21, he was on a bus from Phoenix, Arizona, headed to Indianapolis, Indiana, where he hoped to get established and begin his new life. It was while the bus was passing through Amarillo, Texas, that he began having problems.

Like all devout Sikh men, Daljeet Singh wears a turban and a beard. Daljeet Singh also doesn’t speak English, but he was able to strike up a conversation with another passenger, Pakistani-American Mohammed Chotri. The two passed the time by conversing in Punjabi. 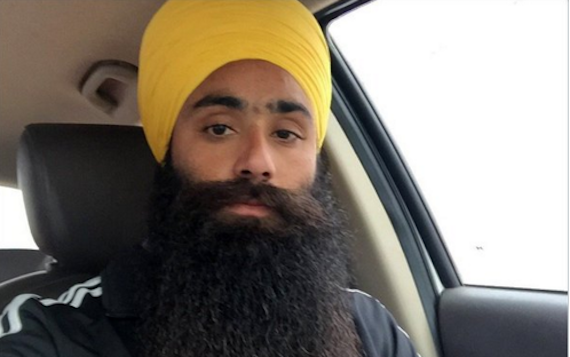 Other passengers began to get suspicious, and one passenger, a woman, called the cops and complained that the two were “acting weird” and discussing bombs.

As the bus pulled into Amarillo, other passengers detained Singh and Chotri until the bus stopped. Amarillo police then boarded the bus and arrested both men at gunpoint.

Singh would spend the next 30 hours detained in Amarillo while police and the FBI, through a Punjabi interpreter, interrogated him at length. Singh says Amarillo cops posted pictures of him without his turban on social media. To a devout Sikh, being seen/photographed without a turban is equivalent to being photographed naked, he added.

Gurjot Kaur, the senior staff attorney at the Sikh Coalition, which is representing Mr. Singh, says that the amount of Islamaphobia in the U.S. and how it affects even non-Muslims is heartbreaking.

“Whether it’s a Sikh man on a Greyhound bus, or an Arabic speaker on a Southwest airplane, the xenophobic fear and bigotry in our country is out of control. By filing this complaint, we hope to bring attention to the crisis facing minority communities today. The list of things brown people can’t do on public transportation is growing — we can’t get a can of Diet Coke, we can’t switch seats on a bus or a plane, we can’t speak in a language other than English, really we can’t be human beings”, she added.