USA: Bahujans and Christians Link Arms With Sikhs to Warn Congressman About Persecution in India

“I explained to Congressman McClintock that persecution doesn’t just impact Sikhs, but all minority communities in India, including the Christian communities,” says Father Joshua Lickter, the church-planting vicar for Incarnation Anglican Church in Roseville, a member of the Anglican Church in North America. He was joined by Manjit Singh Uppal, former president of Stockton Gurdwara (the oldest Sikh-American institution), as well as Balbir Singh Dhillon, president of West Sacramento Gurdwara, and Mandeep Kaur Dhillon, whose father, Surat Singh Khalsa, is presently on hunger-strike in India for release of political prisoners held past their sentences.

During the meeting at Roseville Sikh Gurdwara, Lickter says he also told McClintock: “While more and more people are becoming aware of the threat that ISIS and other radical Islamic groups pose in the Middle East, few people realize the level of persecution that the supposedly ‘democratic’ government of India is both allowing and encouraging within its borders. I told him that I’ve heard firsthand reports from colleagues in India whose churches have been burned and vandalized and whose lives are regularly threatened because of their Christian faith. I want to help advocate for the Sikh community because what impacts one minority group in India impacts them all.” 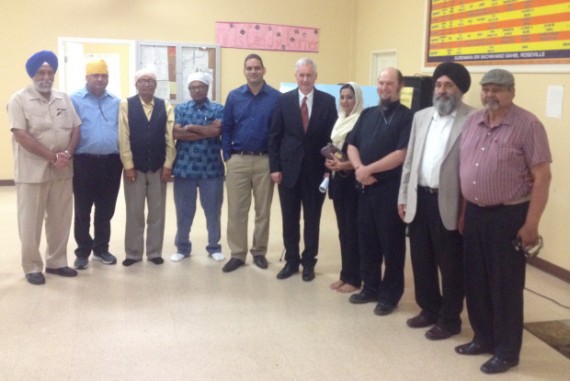 Bahujans, Christians, and Sikhs pose with Congressman McClintock after meeting

Members of Shri Guru Ravi Dass Temple of Sacramento also joined the meeting to warn the congressman about threats facing Non-Resident Indians (NRIs) who visit India. Amar Daroch, Makhan Lohar, and others highlighted the recent case of Ravinderjit Singh Gogi, a Californian and the son of Khalsa, who was arrested, imprisoned, and tortured for two months in Punjab, India. Gogi was released without charges — or compensation for his ordeal — on April 26, two weeks after McClintock initiated a letter to the U.S. State Department requesting it assist Gogi and his father, who is a permanent resident of the United States.

“We thanked the honorable McClintock for standing up against the harassment of NRIs,” says Daroch. “His efforts to end Gogiji’s persecution and senseless detention were granted success by the swift and decisive action of the BSP in Punjab. I got BSP leadership involved in this case knowing this would be the only way to get him out.”

In late April, Indian MP Avtar Singh Karimpuri, President of Punjab state’s Bahujan Samaj Party (BSP) and a member of Rajya Sabha (India’s upper house of parliament), condemned the whole affair, stating: “The government claims that it was working for the betterment of the NRIs whereas the ground reality was that the NRIs were subject to harassment back home.” Saying the groundless imprisonment of an American citizen, who was arrested while visiting his hospitalized father, showed the double standard of Punjab’s SAD-BJP coalition government, he pledged that his party will always stand for the rights of NRIs.

Congressman McClintock, who listened intently to the report, commented: “In my experience, there are typically two types of political parties worldwide — those that are authoritarian and those that fight authoritarianism.”

The congressman, who led six other California representatives in sending an April 15 letter to U.S. Secretary of State John Kerry to “bring to your attention… Surat Singh Khalsa,” also lent his ears to an appeal from Khalsa’s daughter, Mandeep Kaur Dhillon. “My father’s struggle of over 100 days of refusing food in protest of the unjust treatment of political prisoners in India was of great interest to the congressman,” remarks Dhillon. “I urged him to speak out for Bapuji Surat Singh Khalsa. He promised to continue learning about the issue.”

Threats to religious minorities in India, as well as those considered low-caste, have spiked sharply in recent years. In April, the United States Commission on International Religious Freedom (USCIRF), an independent body of the State Department, designated India a “Country of Particular Concern” in its annual report, meaning it is a country that “commit[s] systematic, ongoing, and egregious violations of religious freedom.” The report warned:

“Christian communities, across many denominations, report an increase of harassment and violence in the last year, including physical violence, arson, desecration of churches and Bibles, and disruption of religious services…. Reportedly, local police seldom provide protection, refuse to accept complaints, rarely investigate, and in a few cases encourage Christians to move or hide their religion.”

The report also highlighted how activists from Rashtriya Swayamsevak Sangh (RSS), a paramilitary organization to which Indian Prime Minister Narendra Modi belongs, are involved in the attacks, noting that such “nationalist groups also allegedly target Dalits if they are believed to be considering conversion away from Hinduism.” The USCIRF warned that victims of state-sponsored incidents of mass violence, including the Gujarat Genocide against Muslims conducted in 2002 under the auspices of Modi (who was then Gujarat’s Chief Minster), have not received justice. It also rebuked the Indian State’s refusal to resolve the Sikh community’s opposition to Article 25 of the country’s constitution, which defines Sikhs as Hindus and qualifies, reported the commission, as a “lack of recognition of Sikhism as a distinct religion.”

Others at the meeting with McClintock included Bhajan Singh, Founding Director of Organization for Minorities of India, who says: “We are deeply grateful to the congressman for his unflagging commitment to human rights and for keeping an open door to minority communities in his constituency and region.”