New York: As per an update by the Sikh Coalition [a]fter the Monday filing of an unprecedented lawsuit on behalf of Sikh Army Captain Simratpal Singh, which demanded that the U.S. military accommodate his Sikh articles of faith and abandon its impromptu discriminatory testing, Judge Beryl A. Howell swiftly ruled in Captain Singh’s favor on Thursday evening.

Judge Howell stated in her written opinion: “Thousands of other soldiers are permitted to wear long hair and beards for medical or other reasons, without being subjected to such specialized and costly expert testing of their helmets and gas masks.”

The message delivered from Washington D.C.’s federal court was clear and simple: No, the United States Department of Defense does not have the right to discriminate and make up new rules to prohibit individual soldiers from bravely serving in the U.S. military.

The United States Department of Defense, which had granted and then extended Captain Singh’s temporary religious accommodation until March 31, 2016, remains scheduled to make a final decision on Captain Singh’s permanent accommodation by that deadline. Captain Singh, who is a West Point graduate, Ranger, and Bronze Star Medal recipient, has successfully passed the safety tests required of his unit. 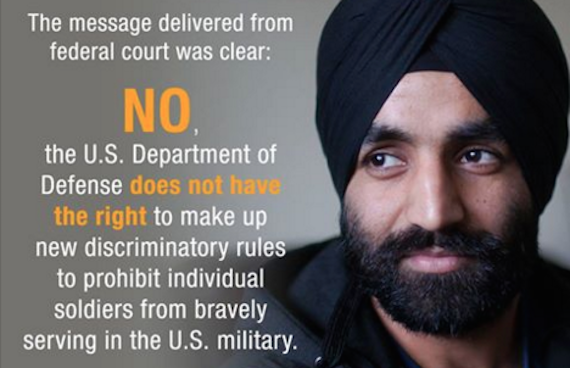 The testing that the military planned to impose on Captain Singh is not required of any other soldiers, even the tens of thousands with medical or religious accommodations, and including previously accommodated Sikhs. Given that Captain Singh has passed the standard safety tests, further testing would clearly be discriminatory.

Last year, 27 retired U.S. Generals called on the U.S. Department of Defense to eliminate the ban on observant Sikhs. These generals joined 105 Members of Congress,15 U.S. Senators, and 21 national interfaith and civil rights organizations, who had previously signed letters in support of American Sikhs’ right to serve.

“What is so sad about the Army’s position in this case is how unnecessary it is,” said Eric Baxter, Senior Counsel at the Becket Fund for Religious Liberty. “Thousands of service members protect our country while wearing beards, including observant Sikhs. There is absolutely no evidence that there is any problem with providing a permanent accommodation so Captain Singh can continue to faithfully serve his country and Sikh beliefs. Thankfully, the Court stepped in to protect Captain Singh’s constitutional rights.”