Gurdit Singh wears a turban and maintains unshorn hair and a beard, which allegedly violate Disney’s “Look Policy.” For seven years, Mr. Singh was restricted to delivering mail to Disney corporate offices, on a single mail route that shielded him from areas where Disney guests congregate. All of Mr. Singh’s co-workers, however, rotated their routes every three weeks and delivered mail in full view of Disney customers. Disney’s segregation of Mr. Singh relegated him to an inferior position, directly impacted his workload, created animosity amongst his co-workers, and precluded his opportunities for professional advancement. 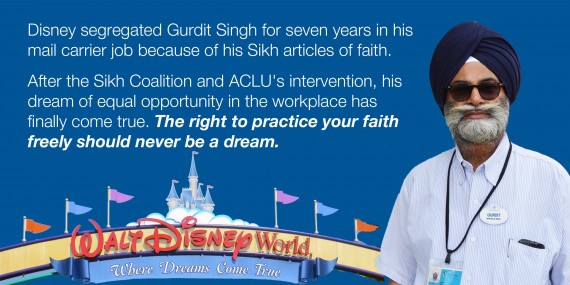 Mr. Singh contacted the Sikh Coalition to help him assert his right to be free of discrimination in the workplace. Earlier this year, the Sikh Coalition partnered with the ACLU and sent a forceful demand letter to Disney explaining that its treatment of Mr. Singh violated the law. In response,Disney agreed to fully desegregate Mr. Singh by allowing him to rotate his delivery route like the rest of his colleagues who work in full view of Disney guests.

“The motto at Disney World is that it is a place ‘where dreams come true.’ For the past seven years, the dream of having equal rights has not been the case for our client,” said the Sikh Coalition’s Senior Staff Attorney, Gurjot Kaur. “Disney was segregating an employee because of how he looks. We welcome Disney’s decision to reverse course and we look forward to this paving the way for other Sikh Americans to wear their articles of faith publicly in jobs at Walt Disney World.”

The Sikh Coalition thanks attorneys Daniel Mach and Heather Weaver at the ACLU Program on Freedom of Religion and Belief for their partnership on the case.

“I am grateful to the Sikh Coalition and the ACLU for demanding that Walt Disney World give me back my dignity and basic rights to practice my faith freely in the workplace,” said Gurdit Singh. “Racial or religious-based segregation has no place in our society. No one should have to face daily humiliation because of his or her religious beliefs. I am also grateful to Disney and hope this decision opens the door for other Sikhs and religious minorities who wish to work for this company.”

As always, the Sikh Coalition urges all Sikhs to practice their faith fearlessly.