New York: A Long Island man was indicted on hate crime charges Wednesday (Feb. 19), for allegedly calling a Sikh man “Osama” in Queens and running him over.

Joseph Caleca, 55, of Setauket, is charged last summer with attempted murder and felony assault, both as hate crimes, in connection with the July 30, 2014 incident. A Queens County grand jury returned an indictment against Caleca on Wednesday, according to the Queens District Attorney’s office.

“The defendant is accused of an unprovoked attack that allegedly began with the defendant driving by the victim and his friends and calling him a terrorist and ordering him to leave the country,” Queens District Attorney Richard A. Brown said in a news release. “After an exchange of words, the defendant allegedly struck the victim intentionally with his vehicle and dragged him along the street.” 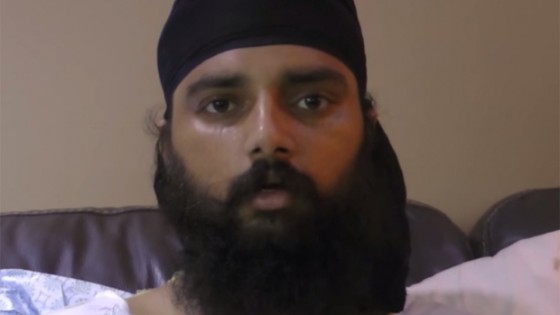 Sandeep Singh was hospitalized after an alleged hit-and-run incident in Ozone Park, Queens

Caleca was arraigned Wednesday on the nine-count indictment. He was remanded on continuing bail afterward, and is next due in court April 22, prosecutors said.

Caleca could be sentenced to up to 25 years in prison if convicted.

Caleca was behind the wheel of his pickup truck at 99th Street and 101st Avenue in Ozone Park, Queens, when he got into a verbal argument with 29-year-old Sandeep Singh because Singh’s car door was blocking the street, police said.

Police said Caleca allegedly got out of his vehicle to confront Singh and his friends.

Singh told police that Caleca called him a terrorist and shouted “bin Laden, go back to your country” before mowing him down, 1010 WINS’ Mona Rivera reported.

“A man in a truck had called him a terrorist and told him to go back to his country,” the victim’s wife, Prabhurpreet Kaur, said earlier this month. “When Sandeep protested, the man ran him over, dragged him 30 feet under the truck and left him to die.”

Singh was treated at Jamaica Hospital Center for abdominal and back injuries following the attack.