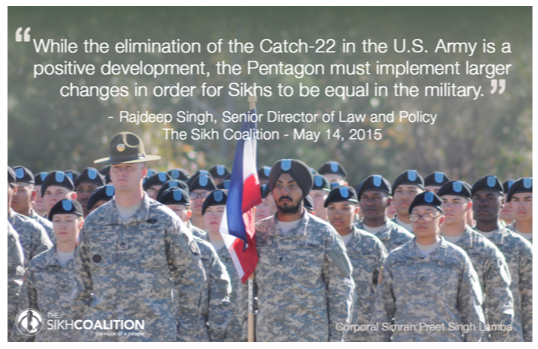 It is the Sikh Coalition’s understanding that this rule change only applies to the U.S. Army at this time.

Important Progress, But Not a Final Fix to the Problem:

Despite these changes, the presumptive ban on Sikh articles of faith still remains and accommodation requests are still being decided on a rarely-granted case-by-case basis. In other words, while it is now easier to request a religious accommodation within the U.S. Army, it is still difficult to actually obtain one.

“While the elimination of the Catch-22 in the U.S. Army is a positive development, the Pentagon must implement larger changes in order for Sikhs to be equal in the military,” said Senior Law and Policy Director, Rajdeep Singh. “The presumptive ban still forces Sikhs to choose between their faith and their career and that’s a discriminatory choice that nobody should have to make.”