Chandigarh: Arson and violence continued unabated in parts of Haryana today where yet another town Kaithal was brought under curfew this afternoon as the death toll in the Jat quota agitation mounted to 10, with four more people succumbing to injuries overnight.

Ten persons have been killed and about 150 injured during the ongoing Jat stir, Haryana DGP Yashpal Singhal said.

“According to the information we have so far, in entire state 10 people have been killed and about 150 injured,” he said. 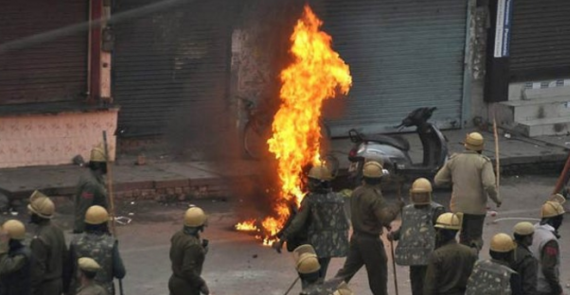 According to police sources, four persons injured yesterday in firing in Jhajjar succumbed to injuries last night, taking the death toll in the spiralling violence to 10. The deceased belonged to Jhajjar, Rohtak and Kaithal districts.

Singhal said around 50 people have been rounded up for indulging in violence and arson and action is being taken against them as per law.

With public transport in Haryana severely hit by the Jat quota stir, the Civil Aviation Ministry has asked airlines to operate additional flights from Delhi to Chandigarh, Amritsar and Jaipur to enable stranded people reach their destinations.

Authorities clamped curfew in Kaithal city in view of the prevailing tension due to protests by Jats and counter demonstrations by non-Jats opposing quotas for them.

Kaithal is the ninth Haryana town where curfew has been imposed, the others being Rohtak, Bhiwani, Jhajjar, Jind, Hisar, Hansi, Sonipat and Gohana town of Sonipat district.

Several roads in Kaithal have been blocked by Jat protesters who have also erected a tent in the middle of Hissar-Chandigarh national highway.

As markets and commercial establishments remained shut in the wake of violent protests by Jats seeking reservation in government jobs and educational institutions, people belonging to non-Jat communities also took out a procession in the city. The non-Jats chanted slogans in support of OBC leader and BJP MP Raj Kumar Saini, who has irked the quota seekers with his anti-Jat remarks.

Jat protestors vandalized a college owned by an MP and a hotel in Sonipat where a rice mill was also set on fire.

A number of buses were set ablaze at Tosham in Bhiwani district.

Note: Above content was originally published by The Economic Times, under title: Jat stir kills 10 and injures 150 in Haryana, at source url:  http://economictimes.indiatimes.com/articleshow/51077835.cms. It’s reproduced as above for the information of readers of the Sikh Siyasat News (SSN).