Saharanpur, Uttar Pradesh (August 4, 2014): Vishav Hindu Parishad (VHP) has demanded CBI inquiry of Saharanpur Incident, in which a Muslim mob had attached a Sikh Gurdwara Sahib, that had resulted in a clashes between Muslims and Sikhs on July 26. The clash had left three people dead and many injured, while property worth lakhs was reduced to ashes. 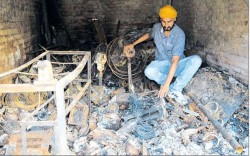 Sikh properties were torched by Muslim mobs during Saharanpur violence

“As we have gone through the entire incident, it seems that the attack on Gurdwara and Sikh community was preplanned”, said Gaud.

Condemning the registration of FIRs against unknown Sikhs, VHP leaders alleged that police has been deliberately targeting Sikhs.

“Police should not take action against anyone, until it gets any proof”, he said.

The VHP’s move came days after the Rashtriya Swayamsewak Sangh (RSS) chief reclaimed that as per RSS ideology, the Sikhs were part of Hindus.