Waking Up to the Guru’s Words of Wisdom

Each weekday morning, before I do anything else, I open my email and ignore the many mails that have come through to look for and open one entitled A Word A Thought. I block out everything to absorb the message for the day about Sikhi that is presented in a simplistic format. It takes me no more than 5 minutes to go through the email, but the explanations, the examples and the advice leave me enlightened and also keep making me think about the message, and how I can apply it to daily situations.

A Word A Thought, or AWAT as it known, has become a part of my daily routine, as it has for the many thousands of subscribers across the world of the free email service that began in June 2014. The AWAT initiative was started by Shabad Foundation, a religious and educational organization registered in India, which aims to bring together a thriving community who read the Scripture, reflect on its immense wisdom and share this knowledge with others.

The uniqueness of AWAT is that it focuses on a single word a day from a set weekly theme. Each email features a word. This is followed by a thought (a verse) from the Guru Granth Sahib to help put this word in context. The meaning and further explanation follows. There is also help with the Gurmukhi pronunciation, and an English translation is provided for easy understanding. It is easily understandable for most age groups and never fails to provoke one into thinking about how we deal with issues around us in the context of Gurbani. In a nutshell, it introduces the teachings of the Guru Granth Sahib in a simple, digestible manner which at the same time sets us thinking on the practical way of dealing with issues and situations we encounter. 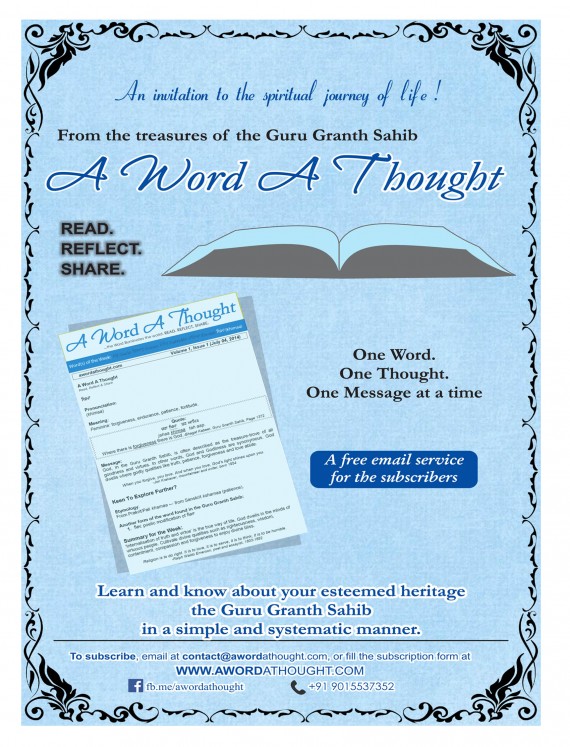 The motivation to start AWAT was borne by the desire to give emphasis on the need to reflect on the simplicity of the message of the Guru Granth Sahib. The Foundation feels that the focus has somehow moved away from the core teachings and values of the Scripture. “Sikhism, in the form of the Guru Granth Sahib, has been blessed with the treasure of Divine Wisdom,” the Foundation says. “However, the need to read, understand and practice the teachings of the Scripture has seldom been fulfilled despite the Scripture being revered as the Eternal Guru (the Guide, the Enlightener). One needs to delve into it to obtain the essence of the Guru’s Wisdom.”

Hence, the aim was to create a service where the content of the Scripture could be presented in the easiest possible manner. From the outset, the aim has been to make the content easily accessible to subscribers. Hence, the format of one word, one verse but with a powerful message.

The language used in AWAT was initially kept as English to appeal to the wider Sikh community present all over the world who might not be well conversant in Punjabi. Also, since the Sikh Scripture is a treasure trove of universal values, the AWAT team felt that it should be in a medium that is accessible to the majority despite their background. However, Punjabi was recently included to cater to demand.

The AWAT email service has grown from strength to strength. It reaches out to subscribers from 28 countries, including India, Singapore, Australia, United States, Canada and United Kingdom. The service is run by a dedicated team of volunteers that look after the content, media and publicity, IT and graphic design.

Despite the immense popularity of the service and the many accolades that it has received since it started, the team behind AWAT is far from done with its work and is now planning the next stage of its sewa. It is considering covering some of the compositions, such as Japji to begin with, in its issues. It is also planning to publish the compilation of daily messages in a book, and organise online discussion groups, online talks and courses.

About Author: Baldave Singh is an experienced editor, and has held senior level roles for some of the leading international media houses including Reed Business Information, The McGraw-Hill Cos. and Bloomberg News. Baldave has more than 20 years’ experience in business and finance journalism, with a focus on the energy markets.

Related Topics: A Word A Thought