Chandigarh: As per reports emanating from Shillong, the capital city of Meghalaya, the Sikh community inhabiting the Punjabi lane area of the city is under attack. The reports have shocked global Sikh community as there are reports that Sikh houses and a Sikh gurdwara were attacked in Shillong violence.

Media reports say that parts of Shillong remained tense for the third straight day as protesters clashed with security personnel until late Saturday night and authorities declared a seven-hour night curfew across the city. 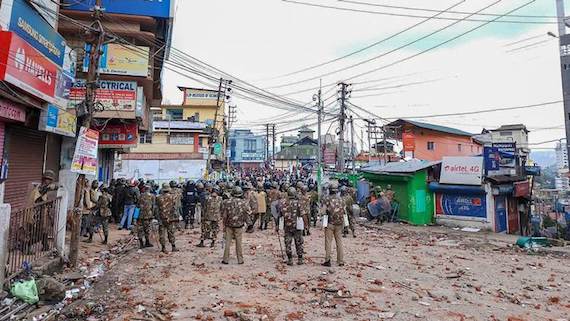 Shillong: Securitymen stand guard a street during curfew in Shillong on Saturday

A report in The Indian Express (IE) notes that a house of Punjabi (Sikh) couple was set afire. As per IE, Sunny Singh, a resident of Shillong’s ‘Punjabi Lane’, as the Them Iew Mawlong locality is also called, said he hadn’t slept the last two nights.

“A few metres from here, the house of a Punjabi family was set on fire last night. We are scared for our lives,” IE quotes Sunny Singh, who is in his late 20s and works in a bank.

In a press release issued last evening, the Punjab Chief Minister said that Meghalaya Chief Minister Conrad Sangma called him up to apprise him of the situation in the state “in the wake of communal violence reportedly triggered by a minor incident” and “to allay any apprehensions of the Sikh community being under attack”.

In his statement Captain Amarinder Singh said the attacks on Sikhs in various parts of the country in recent past was a matter of serious worry. Such incidents had the potential of causing communal divisions that did not augur well for the [country], he added.

Whereas the Punjab CM is quoting Meghalaya CM to say that the incident was triggered by “minor incident”, the Indian Express quotes Sunny Singh and other residents of the locality saying that “the anger directed at the community is part of a long-standing demand from sections of the Khasi society to get them evicted from the area”.

The Indian Express (IE) further notes that Gurjeet Singh, general secretary of the Gurudwara Committee of Punjabi Lane, and Billu Singh, headman of the Harijan Panchayat Committee, allege the violence is part of a larger agenda.

“Since the 1980s, they (Khasis) have been calling us illegal settlers and asking for us to be shifted out of this place. But we have been living here forever and we will stay here. That is our stand. Though several political leaders have over the years spoken of rehabilitating us to some other location, we have never seen anything concrete. It has just been empty talk,” he reportedly said.

Soon after the incident, several organisations in Shillong, including the powerful Khasi Students’ Union (KSU), reiterated their demand for the “eviction” of the “illegal settlers”.

Calling the residents of Punjabi Lane “trouble-mongers who often harass Khasi people”, KSU general secretary Donald Thabah said, “We demand that the illegal settlers in that area are immediately evicted. Those who assaulted the minor Khasi boy should be booked under stringent laws. And the Khasi protesters arrested in the clashes should be released and those injured must be compensated.”

The Delhi Sikh Gurdwara Management Committee and Shiromani Akali Dal (Badal) leaders, including Sukhbir Singh Badal and Manjit Singh G.K. have urged Indian authorities to ensure the safety of Sikh community in Shillong. After meeting Indian Home Minister Rajnath Singh, SAD (Badal) president Sukhbir Singh Badal said that he has urged Rajnath Singh to talk to Meghalaya CM and ensure safety of Sikhs and give compensation to the affected families.

The DSGMC and SGPC have reportedly sent delegations to Shillong to take stock of the situation there.