Dr. Bhimrao Ramji Ambedkar (1891-1956) is profoundly respected among followers of Sikhism for his legacy as a social reformer and his rejection of the Hindu caste hierarchy in modern India. His work also included the collaborative establishment of Guru Nanak Khalsa College in 1937, named in honor of the first Sikh Guru. Dr. Ambedkar himself penned the mission statement of the Mumbai-based educational institution as a sign of fraternity with Sikh religious leaders.

“Dr. Ambedkar incorporated the mission of unity, peace, and fraternity of the Sikh Gurus,” said Mr. Balbir Singh Dhillon, President of the Gurdwara Sahib West Sacramento. “Millions have escaped a life of caste-slavery and hardship because of his vision for social equality.” 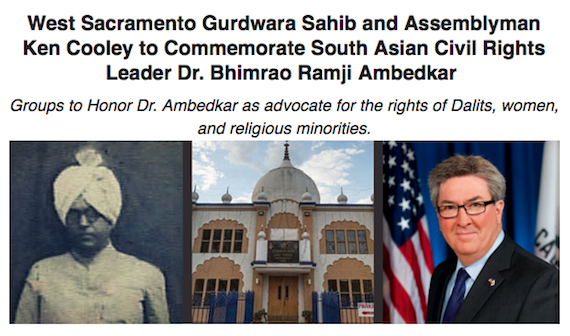 The effort to formally recognize Dr. Ambedkar was spearheaded by Sikh community leader Mr. Darshan Mundy. Mundy serves as the public relations officer for the Gurdwara Sahib West Sacramento and is also a board member of the Sacramento Valley Charter School, the first charter school in the United States established by a Sikh community. The charter school was started by the Sacramento Sangat who currently oversees operation of the school on the Temple grounds. Leaders like Giani Wadhawa Singh Jee’s devout spirituality inspired many from the Punjabi community to embrace the vision of Sikhism with the mission of Dr. Ambedkar .

“We share Dr. Ambedkar’s belief that education is the greatest tool against injustice,” said Darshan Mundy. “We motivate students to strive for excellence so that they could face the global challenges on inequality with a great sense of responsibility and confidence.” Dr. Ambedkar received his Ph.D from Columbia University in 1927 before returning to Mumbai as the chairman of the Constitutional Committee for independent India.

Dr. Ambedkar drew his inspiration from the Guru Granth Sahib, the holy scriptures of the Sikh religion: “Sri Guru Granth Sahib Ji is a spiritual guide for me… Guru Granth Sahib represents a Casteless society. A society where there is no racial discrimination…” The birth anniversary coincides with the Punjabi celebration of Vaisakhi which commemorates the efforts of Guru Gobind Singh in aligning the various people groups of the region into communal harmony.

Dr. Manisha Bangar, an Ambedkarite activist from Hyderabad, India, noted the significant connection between the Sikh text and the mission of Dr. Ambedkar. “The dream of the thirty-six founders of Guru Granth Sahib was fulfilled in the creation of Khalsa Panth in Vaisakhi 1699. This was the foundation for Ambedkar’s noble struggle against caste divisions in India.”