London: At a packed venue in the Houses of Parliament on 26 April, 2016 the ‘Parliamentarians for National Self-Determination’ (PNSD) hosted a Conference focusing on the right of self-determination and how that can be used to bring peace and justice to conflict zones ravaged by decades of violent turmoil.

Lord Ahmed, PNSD’s Chair, hosted the event and expressed his gratitude to members of Parliament from across the political spectrum that offered their support to nations who want to peaceably restore democracy and human rights in their respective homelands. Lord Ahmed implored the international community to do more to protect this core human right and committed to raise this with the UK Government. 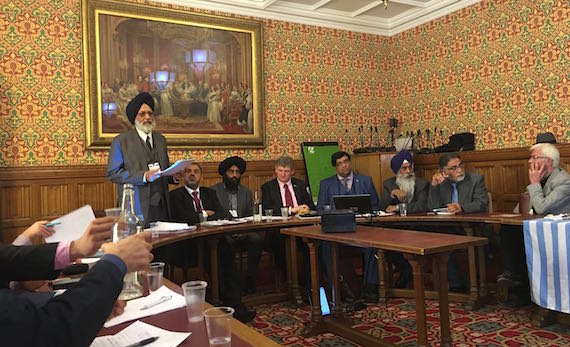 Fabian Hamilton, a Labour Party MP and shadow foreign affairs minister, sent a clear message that the “Labour Party strongly supports the rights of oppressed peoples throughout the world to self-determination as one of the few ways in which conflict and violence may be avoided and communities are able to live together in peace”. He noted that human rights are all too often disregarded by those who choose to overlook the rights of the minority for their own selfish ends.

Peter Grant MP, representing the Scottish National Party spoke of his party’s ideological affinity with all those who sought, through exclusively peaceful means, to secure self-determination for their peoples. He was proud that, despite the outcome, the nations and government of the UK, had respected the right of the Scottish nation to decide its own future in the recent referendum. Alongside this support for such causes he said it was fundamentally important for such movements to ensure due respect and equal treatment who were themselves ‘minorities’ with that self-determining territory. 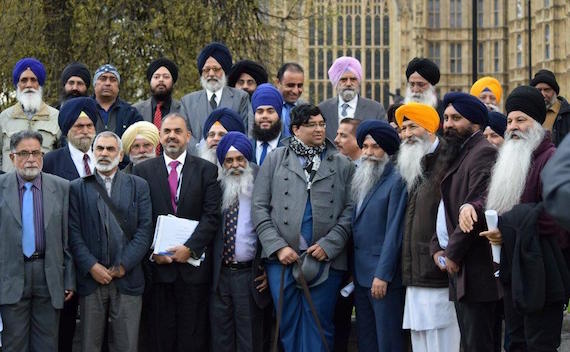 Andrew Griffiths MP, Chair of the All Party Parliamentary Group on Kashmir, said that the Kashmir conflict could only be solved by implementation of the right to self-determination, as was recognised by the UN Security Council itself. He urged the UK Government to do more to facilitate that outcome wherever such conflicts had arisen, especially where the British decolonisation process had itself created the conditions for such conflict.

Tom Brake MP, Liberal democrat MP and foreign affairs spokesman, assured the Conference of his party’s backing for self-determination struggles that based their case on international law and democratic values. He pledged to work with PNSD in order to promote this crucial human right.

The Conference was addressed by senior lawyer Amar Singh Chahal who is also spokesman for Jagtar Singh Hawara, recently appointed by the Sarbat Khalsa (national gathering of the Sikhs); he set out the case for the Sikhs as a nation to be allowed to exercise self-determination in its homeland. It was noted that the event took place exactly 30 years after the Sikhs had declared the formation of an independent sovereign Sikh state of Khalistan and that the violent suppression of that act of self-determination had failed to bring any form of peace or justice to the Punjab.

Dr Iqtidar Cheema, a leading academic and commentator on South Asian affairs, spoke about the genesis of the right of self-determination in international law, from the UN Charter itself to Article 1 of the 1966 Covenant on Civil and Political Rights. He urged the international community to accept that the Sikh nation has an impeccable case for self-determination in the form of a sovereign state and that such a state would bring regional peace and stability by creating a buffer between the permanently tense nuclear rivals being India and Pakistan. India’s official rejection of the right of self-determination, as enshrined in Article 1 of the 1966 Covenant, was an untenable and outlandish position which the international community should see as a direct cause of the conflicts in Punjab, Kashmir and Nagalim.

Professor Nazir Shawl delivered to the Conference a message from Syed Ali Gilani, Chairman of the All Party Hurriet Conference, which outlined the human rights abuses and ongoing oppression of the Kashmiris by a huge Indian military presence. He expressed solidarity with all other struggling nations and appealed to the international community for support. Professor Shawl said the Kashmiris were willing to negotiate on all other things but asserted that the right of self-determination was non-negotiable.

Frans Wellman of the International Naga Support Centre, who travelled from Holland to speak at the event, expressed his surprise at the recent announcement of a peace deal between certain Naga leaders and the Indian government – the details of which have not been disclosed to the affected Nagas. Detailing the chicanery of the Indian negotiators over recent years, he was pessimistic that the core demand of Naga sovereignty would feature and hence feared a possible tragic return to civil war. He described how India had used massive funds to infiltrate and splinter Naga organisations and destroy traditional Naga egalitarian society.

Graham Williamson of ‘Nations Without States’ spoke of the need to engage with civil society within the ‘majority’ communities whose leaders were suppressing self-determination movements. It was, he said, damaging for all sides when violent conflicts arise and progress can and should be made by bringing this realisation to all sides. The ‘other side’ needs to understand the morality, the economic cost, the international opprobrium attached to human rights abuses and the benefits of ending perpetual conflict.

Professor Zafar Khan urged the international community to recognise the dangers posed by the extremist Hindutva forces that now govern India. The threat they posed to minority nations within Indian controlled territory and to neighbouring states was tangible. He spoke of the simmering tensions in Kashmir where the people were poised to rise up in mass revolt at the continuing violations of human rights and dignity by occupying Indian forces.

Ranjit Singh, PNSD’s Administrative Secretary, presented and was given unanimous approval of resolutions which set out a call from the Conference to:

1. the international community to promote the right of self-determination as a means of peaceable conflict resolution;

2. the UN and its Human Rights Committee to take effective action against those states which in reject Article 1 of the 1966 Covenants, on the basis that blatant opposition to a core UN principle was incompatible with the UN’s purposes and requirements;

3. the UN to establish international criminal tribunals to punish those that have carried out massive human rights abuses and even genocide in order to suppress the right of self-determination; and

4. all relevant state parties to the 1966 Covenants to release all political prisoners whose detention is intended to frustrate the ability of nations to politically and democratically pursue their right of self-determination in accordance with international law.