Amritsar: There are reports that Punjab government may take up process to grant parole to Prof. Devender Pal Singh Bhullar. Prof. Bhullar, a Sikh political prisoner, is in jail since 1995 and has never been granted parole till date. He was recently transferred to Amritsar jail in Punjab from Delhi’s Tihar jail.

A news reported by The Tribune (TT) notes that Bibi Navneet Kaur, wife of Prof. Bhullar, is preparing the documents required for his parole. TT notes that Prof. Bhullar’s disturbed mental condition has been made the ground to avail this provision.

Bibi Navneet Kaur reportedly spent around half an hour with her husband on Sunday (June 14) at Guru Nanak Hospital in Amritsar, but complained that the police party did not leave them alone. 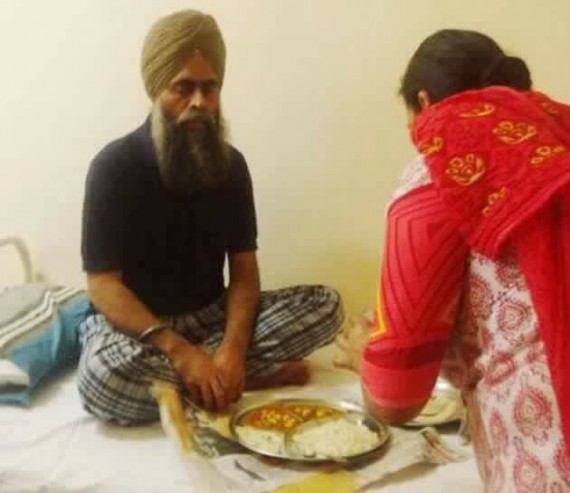 As per sources Prof. Bhullar had expressed the desire to allow his wife to stay longer with him, but the request is still under consideration.

Amidst four-tier security, Bhullar has been admitted to an isolated room of the psychiatry ward at the Swami Vivekananda De-addiction and Treatment Centre in Guru Nanak Dev Hospital, Amritsar.

Around 100 police personnel, headed by an SP-rank police officer and assisted by three inspector-rank and eight ASI-rank officers, have been keeping round-the-clock vigil in the hospital.

“On Tuesday or so, I will submit the parole documents to the jail authorities. I would like to take him to my parental house at Ranjit Avenue, Amritsar, as there is hardly anybody left at his native Dialpura Bhai Ka village in Bathinda. Let’s see for how long his temporary relief is,” she said.

She said that her entry was never restricted in Delhi, but in Punjab, she has seldom been allowed to share personal moments with her husband.

“Here, the policemen just sit next to us. I feel hesitant to talk to my husband. I will request the authorities in writing that at least when I meet him, the policemen should be ordered to leave us alone.

“I visited him for half an hour today after procuring special permission from the jail superintendent, but except for watching television in his room, I could not share anything with him,” she said.

Dr PD Garg, director of the centre, endorsed the move to provide family support to Bhullar as it would help the psychiatric patient heal faster.

Jail Superintendent RK Sharma said that Bhullar could avail parole as per the general parole norms 1962.