“Due to the fact that over the last year there have been over 80 instances of beadbi of Sri Guru Granth Sahib and the Quran in Punjab and and that there have been no action taken against the perpetrators by the Punjab government; there is a general feeling of discontent amongst Sikhs around the world. In addition the fact that the prime accused in the police firing on innocent civilians which lead to deaths of protestors at Behbal Kalan, Punjab have not been arrested although they have been identified is very disturbing. Canada, Europe, America and the British Kabaddi Federations have decided to and jointly announced a boycott of the Punjab Government sponsored World Kabaddi Cup proposed to be held in Punjab, India In November 2016”, reads the statement, a copy of which is available with the Sikh Siyasat News (SSN). 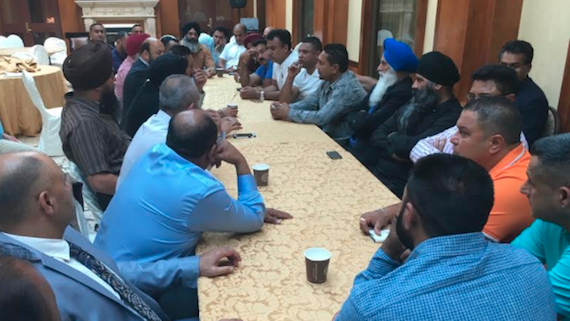 A view of meeting of World Kabaddi Federation Representatives

These Kabbadi Federations’ representatives told the media that because there have been continuing incidents of beadbi of Guru Granth Sahib and other Dharmik Granths the real culprits have not been arrested or identified despite numerous requests to the Government of Punjab. “Due to this in many Countries, Punjabi’s around the world are very upset. In this grief the world kabaddi federations are promising to boycott the Punjab Government sponsored World Kabaddi Cup. In addition it has come to the attention that Pakistan and Iran are also not participating in this tournament” they added.

In addition to this boycott it has been jointly decided that which ever players decide to participate in the World Kabaddi Cup, those players will be jointly banned from playing under the participating Federations in Europe, United States, Canada and England.

Additionally any individual or group who decides to make a team to represent these nations at the World Kabaddi Cup in an illicit manner shall also not be able to participate in any activities of the participating kabaddi federations.