Toronto: The World Sikh Organization of Canada has announced the appointment of Jaskaran Singh Sandhu as Executive Director. 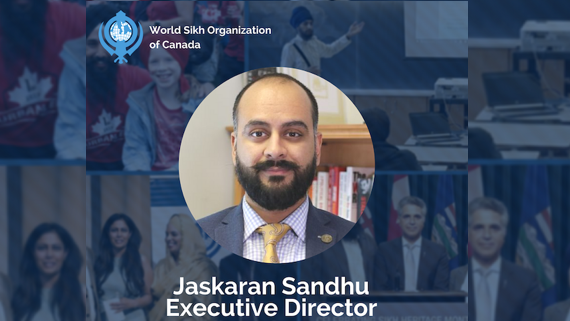 A release by WSO (issued on June 19) states that Jaskaran Singh was most recently the Senior Advisor to Mayor Linda Jeffrey in Brampton’s Office of the Mayor where his responsibilities included overseeing communications as well as special projects such as the Ryerson University expansion and Brampton’s innovation agenda. Jaskaran had previously served as Director of Development for the WSO from 2014-15.

“He was successful in launching several collaborative projects, such as the Sikh Youth Leadership Institute, the Sikh Family Helpline, and KarmaGrow. Jaskaran has continued to assist the WSO legal team in resolving several cases related to the Sikh articles of faith. Jaskaran’s success has led to important policy changes, which in turn have acted as a model for other jurisdictions. He was also instrumental in the #AskCanadianSikhs campaign in response to anti-Sikh reporting in some mainstream media, including moderating a cross country panel tour with journalists and media experts”, the statement reads further.

Jaskaran Singh will be commencing his duties with WSO immediately, said WSO.

WSO President Mukhbir Singh said “we are very excited to have Jaskaran join us at the WSO. Jaskaran has a proven track record of community building, government relations, and youth engagement. We look forward to seeing him work with our national executive to continue moving WSO forward as one of the most successful Sikh advocacy and civil liberties organizations globally.”