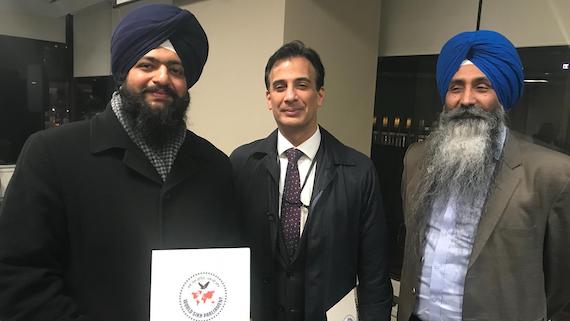 In the meeting, Swaranjit Singh Khalsa Coordinator of Council asked questioned on how UN can help Sikhs who have lost their nation in 1947 and are struggling for equal rights within Indian Occupied Punjab. Khalsa also said “It’s very unfortunate that our community is deprived of spreading education about Sikh history, including education of Sikh genocide. The Indian consulate use their influence to control the narrative outside Indian territories. Sikhs are left with no choice then to ask for their own independent country”.

Himmat Singh coordinator of the World Sikh Parliament and member of the UN and NGO Council made them aware about how history of Sikhs is being erased in India and gave reference of how a historical Gurdwaras is being demolished in Odisha (Mangu Mutt). He said, “Our history and religion are under systematic attack. This year Sikhs all across the globe are celebrating 550th Parkash Gurpurab of Guru Nanak Ji and the same time the incident of demolishing the site related to Guru Nanak has deeply hurt the Sikhs religious sentiment.”

Baljinder Singh Member of Self Determination Council of WSP was also present and raised the issues of how Sikh political prisoners are still behind bars for more than 30 years without any crime.

United Nations Representatives listened to the grievances of Sikh Community and made note of multiple violations done by India.

They recommended Sikhs to have more active participation in the United Nations so Sikh concerns can be shared with the broader communities and nations around a the world. Many participants from various different countries also shared their concerns and violations. The esteemed members answered their questions while seeking their active participatory role.