London: In a written statement, the World Sikh Parliament (WSP) informed that its UK chapter has tendered a memorandum to British Prime Minister on 35th anniversary of Ghallughara June 1984. 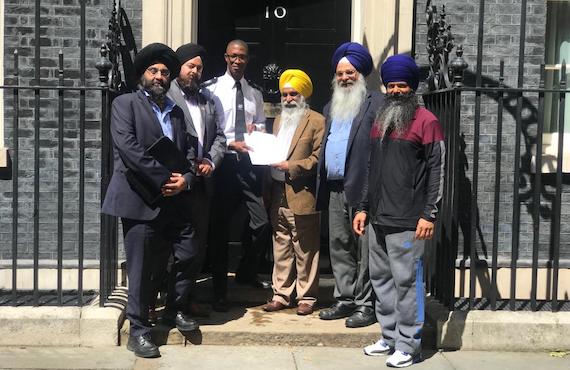 Full text of the release is being reproduced below in verbatim for the information of readers of the Sikh Siyasat News (SSN):

London, 6th June 2019. The World Sikh Parliament’s UK Chapter has asked the UK Government to tackle India on its appalling record of rights abuses against the Sikh nation which took on massive proportions since the infamous Indian army assault on the centre of Sikh spiritual and temporal power in Amritsar in June 1984. The recently formed representative body, which has taken the lead in articulating the concerns of Sikhs on the international stage, asked the UK government to recognise its moral responsibility as the former colonial power and the representative of some 700,000 Sikhs living in the UK, and intervene.

On the 35th anniversary of the attack on the Harmandir Sahib (often referred to as the Golden Temple) complex, in which thousands of Sikhs were massacred and historic shrines were reduced to rubble, a WSP delegation delivered a memorandum to 10 Downing Street calling for bilateral and multilateral action to help bring the Indo-Sikh conflict to a peaceable resolution in accordance with international law. The Word Sikh Parliament (WSP) document urges the British government to promote self-determination in Indian-controlled Punjab, as well as in Kashmir, as the only credible means of restoring justice and bringing enduring peace to a region – which remains the most dangerous on the planet as nuclear armed India, Pakistan and China are otherwise perhaps inevitably to clash in catastrophic conflict.

The urgent need to curb the rabid Hindutva extremism of Indian PM Modi’s newly re-elected government is, according to the WSP’s memorandum, something that most neutral international observers fully recognise and it is now time for key global decision makers to act before massive conflict in South Asia erupts and drags in the rest of the world. The BJP’s determination to abrogate Article 370 in early course will almost certainly trigger renewed hostilities in Kashmir.

The WSP asked the UK to seek security guarantees for the Sikh nation in case of war in South Asia as the Sikhs are not a party to the Indo-Pak conflict yet the Sikh homeland of Punjab will, according to military experts, be the theatre of battle. India’s warmongers do not recognise the Sikhs as a key stakeholder in the region and seem intent on destroying their homeland in the cause of Hindu nationalism.

Delhi High Court’s recent acceptance that it does not have the power to punish genocide, as India refuses to comply with its obligations under the Genocide Convention 1948 by bringing that offence in to its domestic criminal law, was presented as conclusive evidence of the need for an international court to punish Indian genocide perpetrators. Tens of thousands of Sikhs were butchered in November 1984 on the streets of Delhi and elsewhere. On the fast approaching 35thanniversary of those pogroms it is scandalous that the culprits are today being provided impunity by a state that apparently sees genocide as a legitimate weapon in suppressing its minorities.

In addition, the UK government was asked to take up the issues of the release of Sikh political prisoners in India, attacks on Sikh identity and the desecration of Sikh scriptures under a deep-rooted Hindutva-inspired conspiracy to eliminate the Sikhs as a nation and a distinct religion.