Lahore/Chandigarh: The recently formalised organisation called World Sikh Parliament (WSP) had issued a written statement welcoming the initiative of a corridor at Kartarpur Sahib which would enable Sikhs residing in East Panjab to visit the Gurdwara Sahib which is located in West Panjab. 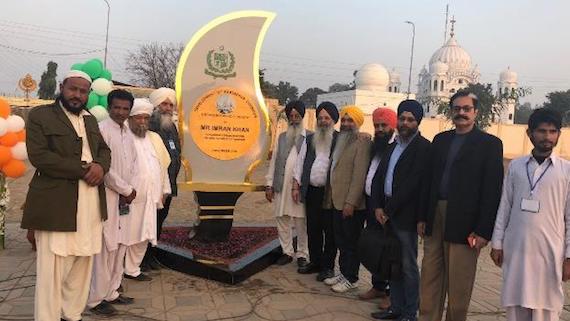 WSP leaders, Sikhs and Muslims together at the ceremony at Kartarpur in Pakistan with the historic Gurdwara in the background

A WSP representative shared the written statement with the Sikh Siyasat News (SSN) which reads as follows (in verbatim):-

FULL TEXT OF THE WSP STATEMENT ON THE KARTARPUR CORRIDOR

Today’s laying of the foundation of the Kartarpur Sahib Corridor at this sacred place by Pakistan’s Prime Minister Imran Khan is an historic event for a number of reasons. First and foremost, it represents a very special manifestation of the message of universal brotherhood taught by Sri Guru Nanak Dev Ji who passed on to his Heavenly abode from here in 1539. There can be no better tribute to his memory from our Pakistani friends.

This occasion will also be a milestone in the burgeoning friendship between the Sikh nation and Pakistan which has, once again, shown its genuine commitment to its minorities in general and the Sikhs in particular. That commitment, so often overlooked by vested interests, is one we Sikhs salute. It sits in stark contrast to the genocidal mistreatment of minorities across the border where the Sikh religion is not even accorded constitutional recognition as a distinct religion and where the desecration of the Sikh scriptures has been repeatedly carried out by those enjoying the shameful patronage of ruling politicians.

The coming year will see Sikhs visit Pakistan in their tens of thousands in the lead up to the 550th Gurpurab celebrations which will conclude in Nankana Sahib in November 2019. The willingness of the Pakistan authorities to honour Sikh sentiments and the undoubted warmth of the people here will be a powerful driver of an enthusiastic engagement between us over the months and years ahead.

The Sikhs have called for the creation of this corridor for decades and are deeply appreciative of the Government of Pakistan for unilaterally taking this initiative despite the many years of unfortunate, reprehensible resistance from the Indian establishment. India’s sudden acceptance of the corridor proposal in recent days, albeit belated, is welcome. It is a direct result of a far-sighted act of statesmanship by Imran Khan and his colleagues. We sincerely thank them and are overjoyed to see these developments at a time when Sikhs across the globe are commemorating the 549th birth anniversary of the founder of our faith.

The Word Sikh Parliament was formed pursuant to a resolution of the Sarbat Khalsa (national gathering) held in the Sikh homeland in November 2015. It will work with the UN, states and non-state actors to represent and safeguard the interests of the Sikh nation and to promote universal values and international law both in the Sikh homeland and beyond.