Ottawa (July 17, 2015): The World Sikh Organization of Canada expresses its concern over the tense situation in Hassanpur, Punjab, India. Bapu Surat Singh, an 82-year activist, has been on hunger strike at his home in Hassanpur since January 16, calling for the release of Sikh political prisoners who have served their minimum sentences but remain imprisoned.

According to reports, a large contingent of army and police has recently been deployed in Hassanpur and all roads to the village have been heavily barricaded as police and civil administration pressure Bapu Surat Singh to end his hunger strike. A group of Sikh activists are also present at Bapu Surat Singh’s home, vowing to prevent his arrest. Bapu Surat Singh had previously been arrested and released after being force-fed. 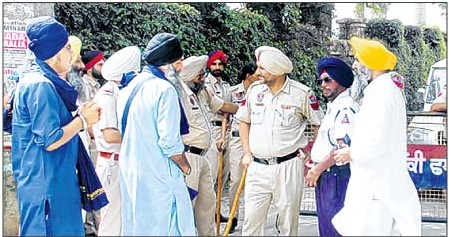 WSO President Dr. Amritpal Singh Shergill said, “the tense situation in Hassanpur is of grave concern to us. The release of Sikh prisoners who have served their sentences is a human rights issue and must be addressed immediately. While other prisoners are regularly granted parole and released after serving their minimum sentences, there are many Sikh prisoners who have served decades in prison without release. Sikh prisoners who have served their sentences must be treated like other inmates in the Indian system and allowed the opportunity to return to their families and rebuild their lives. Bapu Surat Singh has been on his hunger strike for over six months to raise awareness about this issue. The use of force at this time to end his protest would be deeply troubling and we fear, may have serious repercussions.”

The WSO prays for the health of Bapu Surat Singh and calls on the Punjab and Indian authorities to immediately address his reasonable demands.