WSO Concerned by Ongoing Arrest & Detention of Sikhs in Punjab

Ottawa, Canada: The World Sikh Organization of Canada is deeply concerned by the ongoing arbitrary arrest and detention of Sikhs across Punjab in recent days. Sikhs who attended the Sarbat Khalsa gathering held on November 10 2015 or who were involved in the mass protests against the desecration of Sri Guru Granth Sahib are being arrested by the Punjab Police and detained under various sections of the Indian Penal Code including sedition and apprehension of breach of peace. 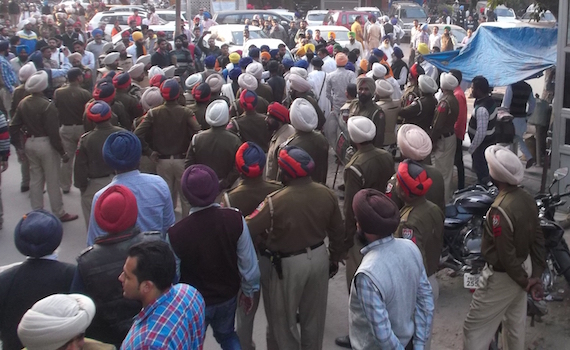 A view of heavy police deployment outside Amritsar court complex in wake of court appearance of organisers of the Nov. 10 Sarbat Khalsa 2015 [File Photo]

The WSO’s President Dr. Amritpal Singh Shergill said today, “the arbitrary harassment, arrest and detention of Sikhs in Punjab on the grounds that they attended peaceful protests and rallies is unacceptable. The Punjab Police is routinely arresting Sikhs under section 107/151 of the Indian Penal Code which only requires an ‘apprehension’ of breach of peace at a future date. Raids are taking place across Punjab at the homes of Sikh leaders and activists, their families are being harassed and they are being arbitrarily held for no fault but exercising their right to protest. If India prides itself as being the world’s largest democracy, it cannot disregard the basic human rights of its citizens. Those individuals who are being detained simply for engaging in peaceful protest or exercising their right to freedom of speech must be released immediately.”