Geneva: On the 34th anniversary of the genocide of the Sikhs in India during the first week of November 1984, a delegation from the recently formed World Sikh Parliament (WSP) met with a senior UN human rights official in Geneva to urge action by the world body to deal with the range of key human rights concerns that define the decades-old conflict between the Sikh nation and the Indian state, reads a release issued by an official of the World Sikh Parliament.

The WSP was formed pursuant to a resolution of the Panthic gathering held at Chabba village near Tarn Taran in the Sikh homeland in November 2015. It has resolved to pursue the cause of Sikh human rights, both collective and individual, and to internationalise the campaign. The engagement with the UN in Geneva marks the first step in that process. 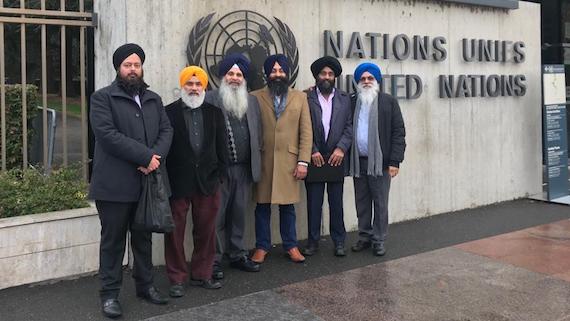 A release issued by the WSP reads: “Up to 30,000 Sikhs were massacred in Delhi and other Indian cities in November 1984 following the assassination of Indian PM Indira Gandhi. Countless commissions of enquiry, decades of litigation and widespread international condemnation have failed to secure any meaningful legal accountability for those that planned and directed the genocide. Human rights bodies have amply documented the systematic, organised nature of the mass killings but the Indian establishment, to this very day, calls the violence “riots”, rather than accept its responsibilities under the Genocide Convention 1948. It is remarkable that it falls to bodies such as the state assemblies of Ontario in Canada or Connecticut in the USA to recently pass official motions declaring the pogroms as being an act of genocide which needs to be addressed as such. The WSP has now called for the UN to take a lead in establishing an international criminal tribunal to deliver justice, along the lines of the processes which saw genocide perpetrators from Ruanda and the former Yugoslavia punished”.

The delegates from the UK, Switzerland and France also delivered a detailed memorandum which focussed on the core issue underlying the conflict in Indian-controlled Punjab.

As the release, the document described how India’s unlawful and forcible denial of the Sikh nation’s right of self-determination in its homeland was not only a breach of international law but a manifestation of a fascist Hindutva ideology which has also targeted legitimate freedom struggles in Kashmir, Nagaland, Manipur, Assam and elsewhere. The WSP urged the UN to robustly challenge the official Indian ‘reservation’ against Article 1 of the 1966 International Covenants on Human Rights which set out the right of self-determination, so that India is brought in to line with universally recognised norms and so that conflicts in those regions may be peaceably resolved. The Sikhs have, for their part, freely determined that a sovereign, independent Punjab in that territory is the only realistic means of securing peace and prosperity in it, where good relations with all of its neighbours will also bring regional stability to a dangerously unstable part of the world.

The WSP delegation articulated the need for global pressure on India to release Sikh political prisoners, many of whom remain incarcerated despite completing their sentences. It further called for vigilance by the world’s human rights bodies amid the current tension in the Sikh homeland over the repeated desecration of the Sikh scriptures by cults that have enjoyed massive state patronage. The WSP hailed the peaceful show of people power in Punjab over recent weeks where there have been mammoth gatherings demanding immediate action to punish the guilty but where the authorities are refusing to act. The risk of repression against the protestors looms large, but diaspora Sikhs have vowed to hold any rights violators to account in case the state adopts familiar tactics to crush the legitimate demands of the Sikh masses.

“The outrageous declaration that Sikhs are deemed to be Hindus in Article 25 of India’s constitution was also highlighted as a particularly obvious Hindutva mechanism aimed at rejecting Sikhism as a distinct religion, which needs UN action to dismantle. Repeated efforts to amend that fascist provision have been rejected, even though that constitution has otherwise been amended over 100 times since its adoption in 1950” the release reads further.

It further said that the WSP delegation pledged the organisation’s support for the UN’s human rights treaty framework and committed to work with the UN to ensure compliance with its terms in the Sikh homeland and elsewhere, irrespective of the ‘reservations’ and appalling rights record of the Indian state. They advised the UN to dismiss out of hand Indian ambitions for a permanent seat on the UN’s security council, as it would be foolhardy in the extreme to allow a gross violator of those very treaties veto power over any future UN action against it.