New York: Following sixty-six acclaimed performances in the US, England, Scotland, Canada, and India, “Kultar’s Mime”, a devised play composed by playwright and director J. Mehr Kaur, heads to Malaysia from May 19 to May 27, 2016. The cast includes three Boston-area actors – Ross Magnant, Ben Gutman and Sydney Grant – as well as Cassandra Rose Blaise DiMarco from New York and Rose Fieschko from Portland, Oregon. Performances are scheduled in the cities of Melaka (May 20 and 21), Johor Bahru (May 22), Kuala Lumpur (May 23 and 29), Ipoh (May 25) and Penang (May 27). 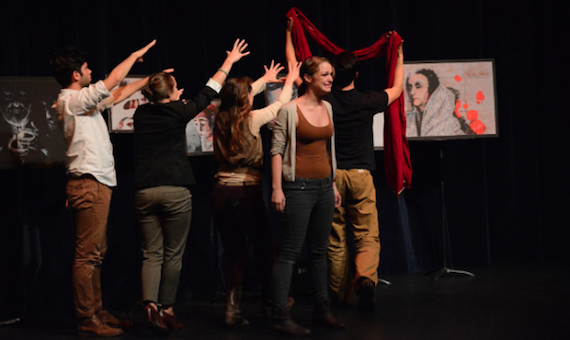 “Kultar’s Mime” blends painting, poetry, theater and music to tell the stories of Sikh children who survived the Delhi Massacre in the wake of Prime Minister Indira Gandhi’s assassination. The play is adapted from the poem “Kultar’s Mime” by Sarbpreet Singh and incorporates text from “In The City Of Slaughter” by Haim Bialik. The play was presented at British Parliament and Scottish Parliament, and was featured at the 2015 Parliament of the World’s Religions in Salt Lake City. It has been presented at several universities and colleges including Harvard, Columbia, Stanford, UC Berkeley, Carleton, Boston University, Kings College and several others. On the 30th anniversary of the massacre, a performance was staged in Delhi, receiving terrific press in Mumbai, Kolkata, Chennai and Bangalore. The play was noted by The Times of India for “stirring the audience and garnering applause,” and was called “chilling” by the Utah Theatre Bloggers’ Association.

“Kultar’s Mime” is being presented worldwide by the Sikh Research Institute (SikhRI), Bridgewater, N.J. The play has helped start a global conversation about 1984 both within and outside the Sikh community. Inni Kaur, CEO of the Sikh Research Institute explains, “The outpouring of compassion has been overwhelming as this poignant tale of four young survivors of terrible sectarian violence has traveled the world that continues to be divided by differences of faith and culture.”