Youth arrested for attack on Giani Mal Singh; No case registered so far

Anandpur Sahib: A Sikh youth and an ad hoc employee of the Shiromani Gurdwara Prabhandak (SGPC) is arrested by Anandpur Shaib police in relation to attack on Giani Mal Singh, but no case is reportedly registered so far. Notably a youth named Joga Singh, who was in Nihang attire, had assaulted Giani Mal Singh with a “kirch”. According to the police Joga Singh is resident of Majitha in Amritsar district and he was working as a pathi at Gurdwara Kiratpur Sahib. 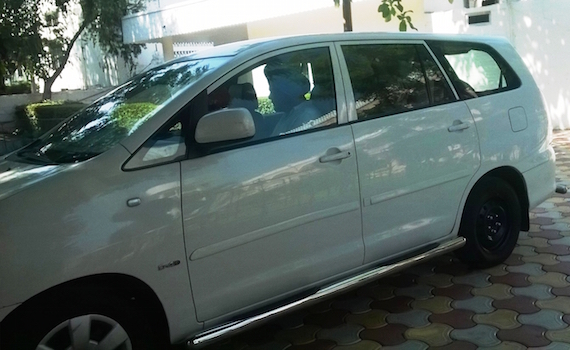 Police took away the young attacker in this vehicle

Local sources told Sikh Siyasat News (SSN) that Giani Mal Singh who escaped attacked with minor injurries on this thigh has decided to not to lauch police case against Joga Singh.

According to the Indian Express (IE) Giani Mal Singh said: “I conveyed my decision to (Rupnagar) SSP Varinder Pal Singh and to (SAD MLA from Ropar) Daljit Singh Cheema that I do not want any case registered against the child”.

“Joga Singh hails from Majitha in Amritsar district and worked as a pathi at Anandpur Sahib. He had come to Takht Keshgarh Sahib for some work today. In a fit of rage, he attacked the jathedar,” said SHO Harkirat Singh. “Joga Singh has been detained and being questioned for the attack”, he added.